A global initiative—an urgent call to action—encouraging startups to grow their breakthrough solutions to humanity's boldest challenges.
The Laudato Si’ Challenge will unite humanity in common purpose and productive conversation, much like His Holiness Pope Francis’s “Revolution of Tenderness.” It will be a beacon of new business, inspiring a new generation of entrepreneurs to build for-profit, for-purpose companies that address humanity’s biggest challenges in ways that are beneficial to all.
Connect4Climate has partnered with the “Laudato Si' Challenge 2017," an initiative advised by His Eminence Cardinal Peter Turkson, Prefect to the Dicastery of Integral Human Development. The challenge actively supports social justice by finding, funding and incubating early to mid-stage startup companies that have solutions to climate change and human migration with innovations across seven categories (food, water, energy, conservation, urban solutions, and finance and industry) in accord with the principles of Pope Francis’s Encyclical “Laudato Si’”.
In summer 2017, nine of the best startups, (from 20 countries and five continents), participated in a premiere program run by accelerator veteran Stephen Forte in Rome.
INSPIRATION

December 4th - Laudato Si’ Challenge Demo Day Event
The event is under the patronage of His Eminence Cardinal Peter Turkson's Dicastery for Promoting Integral Development, and presents the inaugural nine companies from the Laudato Si Challenge - companies with sustainable, impactful solutions that answer Pope Francis' call to realign business with the ecology of the earth and our human ecology.
Nine companies defining the future of capitalism
Over 300 early-stage companies from all over the world applied to The Laudato Si’ Challenge this year and The Laudato Si’ Challenge Team chose an elite 9 to attend the 8-week accelerator program in Rome this summer. The companies received world-class mentorship and growth strategies, a $100k equity investment thanks to 2017 investors, and mission-alignment advice from His Eminence Cardinal Turkson.

December 5th  - Celebrating the Social Economy Dinner
The dinner will celebrate the results of the “Laudato Si’ Challenge Demo Day” event, and it will feature music performances and interventions from the participants. During this special event, Kimberly Steward, producer of Manchester By The Sea, will announce the winner of the Uniting4Climate VR/360-Video Pitch Competition.

​  Meet the Uniting4Climate VR/360-Video Pitch Competition finalists
International change-makers, investors, artists and luminaries are coming together to celebrate the culmination of the inaugural Laudato Si’ Challenge. The event will feature the presentation of the Laudato Si’ companies to the global marketplace, together with a dinner awards celebration featuring music performances.
The event will take place at Westin Hotel, Rome
Banner and thumbnail photo credits to Daniel Pinto Lopes

In 2015, Pope Francis wrote “Laudato Si’: On Care for Our Common Home,” in which the Pope calls for an international dialogue about how to approach and act upon the ecological crisis. Any conversation about how to care for our common home must also address the ways international business practices have contributed to the climate change crisis while ignoring the marginalized among us.
The threat of climate change marches toward us with certainty, and it is increasingly necessary that businesses actively lead the way in care for our common home, protecting the diversity of the earth’s ecology and of humanity.
Companies that do this - social impact companies - exemplify the next era of capitalism. They will ensure the diversity of the earth and its people will not only survive, but thrive.
The Laudato Si' Challenge - a product of a Right Now! conference in November 2016, and advised by His Eminence Cardinal Peter Turkson, Prefect to the Dicastery of Integral Human Development, actively supports social justice by finding, funding and incubating companies that have solutions to climate change and human migration with innovations across seven categories (food, water, energy, conservation, urban solutions, and finance and industry) in accord with the principles of Pope Francis’s clarion call.
In 2017, the first edition of The Laudato Si’ Challenge welcomed participation from over one thousand entrepreneurs representing nearly 100 countries. The top ten enterprises each received a round of investment and spent the summer in Italy, shuttling between Vatican City and their offices inside the LSC Incubator in Rome.

On December 4-5, 2017, and after more than a year’s worth of hard work, each of the ten enterprises will return to the Vatican to attend the “Celebrating the Social Economy” event. Each project will be showcased and celebrated in front of an audience of 350 social entrepreneurs, philanthropists and investors. Following the enterprise demonstration and showcase, The Laudato Si’ Awards show will conclude the summit. Three individuals who have successfully demonstrated the spirit of the Laudato Si’ will be recognized in front of a star-studded crowd at an event, which includes live musical performances by world renowned artists and musicians.
Connect4Climate is the climate change communication global partnership program of the World Bank Group. It is supported by the Italian Ministry of Environment, Land and Sea, the German Federal Ministry for Economic Cooperation and Development and the World Bank Group, along with more than 400 partners including civil society, media networks, international organizations, academic institutions, youth groups and the private sector.
The World Bank Group (WBG) is committed to strengthening its engagement with religious leaders and faith based organizations by fostering dialogue and building new and innovative partnerships that will advance the dual goals of ending extreme poverty by 2030 and boosting shared prosperity. This commitment builds upon past efforts that have included the World Faiths Development Dialogue and recognizes the crucial role that faith communities have and continue to play in combatting poverty and fueling social movements.
In late October 2017, Connect4Climate has been invited by the Laudato Si’ challenge founders to officially partner with the initiative and facilitate logistics and planning in Rome based on the events hosted with the Holy See over the past years.
Connect4Climate and the World Bank Group have previously hosted several events and initiatives in support of His Holiness Pope Francis message of “care for our common home” and the Encyclical Letter Laudato Si’, including but not limited to the following:

​  Interfaith Dialogue for the Environment (G7 Environment, Bologna, June 2017)
In June 2017, religious leaders gathered to urge the G7 Environment Ministers to boldly act on climate change and encourage environmental protection. Faith representatives from all over the world engaged in a meaningful dialogue about how their faith traditions called for environmental protection, and highlighted the important role religions can play in tackling climate change and ending extreme poverty.
Related article:
Faith leaders unite around a shared commitment to protect the Planet and combat climate change
The event featured messages from His Holiness Pope Francis, who reminded the participants that “Action is the key word in order to transform this desert into a forest”, as well as H.H. Bartholomew I, Ecumenical Patriarch of Constantinople, who wrote: “Let us remind our nations that the earth is not a possession but a partner on our journey.”
As a result of this meeting, the Religious representatives signed the “Bologna Interfaith Charter: Living Our Values, Acting for Our Common Home”, which was delivered to the G7 Environment Ministers on the opening day of their meetings. 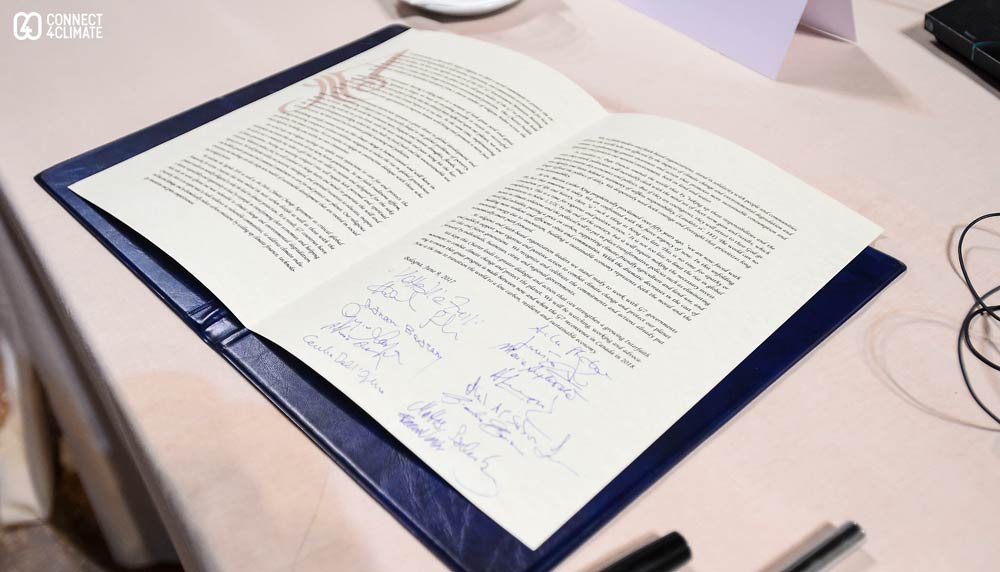 ​  Fiat Lux: Illuminating Our Common Home
On December 8, 2015, a humanitarian coalition led by the World Bank Group's Connect4Climate program presented a gift of contemporary public art entitled "Fiat Lux: Illuminating our Common Home" to Pope Francis on the opening day of the Extraordinary Jubilee of Mercy.
At this unprecedented and historic event, beautiful images of our shared natural world were projected onto the façade of St. Peter's Basilica in a contemporary work of public art that told the visual story of the interdependency of humans and life on earth with the planet, in order to educate and inspire change around the climate crisis across religions, generations, cultures, languages and class.
The large-scale architectural public art installation was inspired by the themes of climate change, human dignity and the earth's living creatures in the Encyclical "Laudato Si'". Programmed to coincide not only with the Jubilee, but also with the United Nations Climate Conference
COP21 in Paris, the historic occasion called on citizens of the world to join a global movement to protect our common home.

​  People’s March for the Earth
On Sunday, November 8, 2015, on the Day for the Care of Creation promoted by the Vicariate of Rome, people from all over the world together with civil society and faith organizations marched from the Coliseum, the iconic symbol of the Eternal City, through Via dei Fori Imperiali before arriving in St. Peter’s Square, where His Holiness greeted the audience and the participants of the march during the Angelus.