On 26 February we are celebrating the 30th Anniversary of the Intergovernmental Panel on Climate Change (IPCC)
The world is more connected than ever. United we are addressing our generation’s challenge, climate change. We are all for the green, the green transition to a low-carbon resilient future. But this is only possible with a solid understanding of our climate system. That is why we are celebrating 30 years of the Intergovernmental Panel on Climate Change (IPCC). (see full program)
The IPCC has been scrutinizing and collating all the published scientific work that has been done on climate change, issuing sober reports that reveal the vital evidence we need to work on protecting our lives and the planet we live on for future generations.
To mark 30 years of mobilizing climate science, to celebrate the IPCC achievement and debate what needs to be done going forward, a series of events under the All4TheGreen umbrella and organized by Connect4Climate, will be presented in Bologna at the oldest university in Europe, on Monday, February 26th, with internationally renowned scientists, government representatives, academics and IPCC leaders all present.

In June 2017, Bologna hosted #All4TheGreen, a week of about 100 activities in a collective effort to support the appeal for an economy that highlights efficiency saving and reusing resources. Photo Credit: Leigh Vogel / Connect4Climate
Last year, All4TheGreen gave the city of Bologna a real buzz with a hive of environmental activities leading up to the G7 Environment Ministers meetings. About 100 events around the city emphasized our need to find lasting solutions for environmental protection and the climate challenge, and highlighted the unstoppable momentum pushing for a low-carbon resilient future, that we are all for the green.
The IPCC event next week will be preceded by a screening of "Viaje a Los Pueblos Fumigados" with an introduction by the Argentinian director Fernando Solanas at the Cinema Lumière in Bologna on Saturday, February 24. The screening is presented in partnership with the Fondazione Cineteca di Bologna as part of Connect4Climate’s Film4Climate initiative.
The program for Monday, February 26, includes discussions on Climate Knowledge for Action, linking Climate Action to Sustainable Development and the Role of the IPCC and its Future. Renowned speakers and leaders on climate science will inspire from Europe’s oldest University town, online through the Connect4Climate community, and the day will culminate with the special artistic performance “Cracking Danilo Rea”: a dialogue between man and technology created by artist Alex Braga, who works across music and concept art, and designed with Danilo Rea, one of the most influential piano improvisers worldwide.
The main proceedings will open at 10:30 am with introductory greetings from the Rector of the University of Bologna, Francesco Ubertini, IPCC President Hoesung Lee and Minister Gian Luca Galletti. At 11:30 am there will be a session on climate knowledge for an ambitious action, which will be attended by H.E. Deo Saran, Fiji’s Ambassador to the Kingdom of Belgium, Permanent Representative to the European Union and Special Envoy to UNFCCC. At 2:30 pm a panel on climate actions in favor of sustainable development is scheduled with the Director-General of the Ministry of the Environment, Francesco La Camera, and the president of the WWF Italia, Donatella Bianchi, taking the floor. At 4:00 pm the panel on IPCC looking at a low-carbon future and, at 6:45 pm, the live concert of Danilo Rea and Alex Braga.
See the full program and biographies here
Download the social media kit
Open to all, the proceedings will aim to increase awareness among the public - and above all the young - on climate change and to stimulate a new generation of scientists to continue their efforts to uncover and share widely the best possible research and analysis for climate action.
Join us in Bologna
If you are in Bologna, please join us for this special event. Register using Eventbrite
Join Online
Join the event at Connect4Climate’s Facebook page

Engage on social media with #IPCC30 and #All4TheGreen

2018 marks the 30th anniversary of the Intergovernmental Panel on Climate Change (IPCC), the international body for assessing the science related to climate change. Set up in 1988 by the World Meteorological Organization (WMO) and United Nations Environment Programme (UNEP), the IPCC provides policymakers with regular assessments of the scientific basis of climate change, its impacts and future risks, and options for adaptation and mitigation.
Over the years, IPCC assessments have provided a solid scientific basis for governments at all levels to develop climate-related policies and underlined negotiations at the UNFCCC’s Climate Conferences. IPCC assessments are written by hundreds of leading scientists who volunteer their time and expertise as Coordinating Lead Authors and Lead Authors of the reports. They enlist hundreds of other experts as Contributing Authors to provide complementary expertise in specific areas.
The IPCC is currently working on a special report on the impacts of global warming of 1.5 °C above pre-industrial levels and related global greenhouse gas emission pathways, in the context of strengthening the global response to the threat of climate change, sustainable development, and efforts to eradicate poverty. The report will be finalized in October 2018 and officially presented in time for COP24 to take place in Katowice, Poland, later this year. 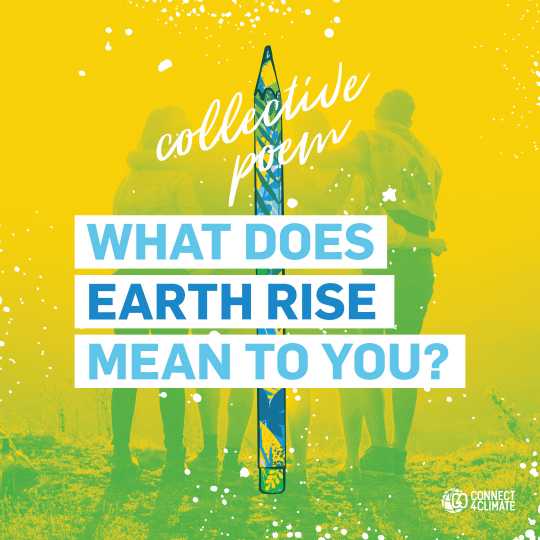 Presenting "#EarthRise," a Poem Created Collectively by Our Community