Sport matters to us. Most of the world passionately follows sport, whether it’s football, baseball, cycling, tennis, or the athletes competing at the Olympics.

Climate change matters to us. It serves no good denying it – global temperatures are rising. According to the World Bank Group’s Turn Down the Heat reports, the planet could warm from its current global mean temperature of 0.8°C above pre-industrial levels to as high as 4°C above pre-industrial levels by 2100, unless countries pledge to abitiously reduce global greenhouse gas emissions.

Even with conservative climate projections, only 11 of the previous 19 sites could host the Winter Olympic Games in the coming decades, according to a new study from the University of Waterloo, Canada  and Management Center Innsbruck, Austria. One of the latest victims of extreme weather in sport was the Chinese tennis player, Shuai Peng. On September 5, 2014 she was forced to retire from the US Open semifinal match due to heat related cramping. She was helped off the court in a wheelchair after collapsing twice during the match.

After announcing the Sport4Climate initiative of Connect4Climate to over 100,000 current and former Olympians through the World Olympians Associations (WOA) social media outlets, we knew at Connect4Climate that we are up to something serious requiring conventional and unconventional communication methods to spread the message for action on climate change.

One would wonder, why Olympians? According to WOA: “Olympians have a special capacity to use the power and neutrality of sport for the good of society, employing its unique potential to foster social cohesion wherever it is needed. Olympians personify the value of excellence, teamwork, and discipline. They can serve as role models to help bring communities together. Across all ethnic, religious, and social divides.”

Naturally, this call included the World Bank Group’s most famous Olympian, former president James Wolfensohn, who represented Australia in fencing during the 1956 Olympic Games in Melbourne. He currently serves as a member of the Honorary Board of the International Paralympic Committee.

Furthermore, the WOA mission aims to: “To serve the needs of Olympians at all stages of their lives and to mobilize Olympians helping them to make the world a better place through the daily practice of Olympism.”

Striving for environmental excellence runs parallel to achieving distinction in sport. Environmental governance became a structural part of the Olympic framework and thinking. The culmination of this was articulated at the Centennial Olympic Congress (1994) where concern for the environment became the third dimension of Olympism and the role of the IOC, as stated, was “to encourage and support a responsible concern for environmental issues, to promote sustainable development in sport and to require that the Olympic Games are held accordingly.”

The Olympic Movement founder, Baron Pierre de Coubertin, was first and foremost an educator who saw sport as a powerful catalyst for social and economic development. He believed sport could bring about “the harmonious development of man” and “the establishment of a peaceful society concerned with the preservation of human dignity”.

Walking and cycling provide travel options that have the lowest carbon footprint, few adverse environmental impacts, and contribute to improving people’s health. While not suitable for all journeys, the core objective is to create the conditions where a greater proportion of trips, especially in urban areas, are made on foot or by bicycle.

Having said all that, it was evident to me that after talking the talk, we must show too that we walk the walk, especially in urban areas. On Sunday, November 2, 2014, we teamed up with our new partner, Achilles International, a global program encouraging disabled athletes to participate in long distance road racing. On this cold and windy day, Denise Smith of Colorado, who lives with mild left sided cerebral palsy, along side Stacy Bolyard of Colorado, and myself, as guides, departed for the five-borough journey of the New York City Marathon along with 50,000 other runners from around the globe.

A photo posted by Connect4Climate (@connect4climate) on

A few moments before his own race the President of Achilles International, Dr. Richard Traum, a disabled wheelchair racer, emphasized: “After the cancellation of the 2012 New York City Marathon due to the devastation of Hurricane Sandy, we athletes have to take under serious consideration climate change as a part of our prepping equation. We have to be a part of the movement and support it wholeheartedly.”

Reflecting on the race at a water station Denise declared: “I dedicate this race to future generations for which we should save the world”, as Stacy added: “We have one planet and we have to protect it.” With deep intellectual motivation, we firmly advanced to the finish line, or perhaps I should say “windsurfed” with wind gusts up to 50 miles per hour.

Denise arrived at the finish line in Central Park of the Big Apple with her Personal Record of 6:30:38! Her genuine smile and gratitude said everything. She is my hero. We finished the marathon, 26.2 miles, despite the wind and cold! And we did it calling for climate action!

Many of the spectators and fellow runners asked us about our new Sport4Climate logos, our messenge for climate action. Connect4Climate’s inittiative has done the New York City Marathon, now we have to keep it running.

As a matter of fact, we all agreed that we should run other marathons. Denise is craving for the Boston Marathon in 2016, which is considered by many the pinnacle marathon. Stacy and I believe that it is only a matter of time for Denise to break the illusive mark of 6 hours. Maybe in the big climate year, 2015!

Sport can shape the way people think about the environment. Because it is so popular on every continent of the planet, sport has a vital role in delivering a powerful message. It keeps humans healthy but it can also keep the planet healthy too. To paraphrase the motto of the YMCA, sport can regenerate the body, mind, spirit and nature – enhancing the individual and the land in which he or she lives.

Hope to see you on the trails whether it is walking, hiking, or running! 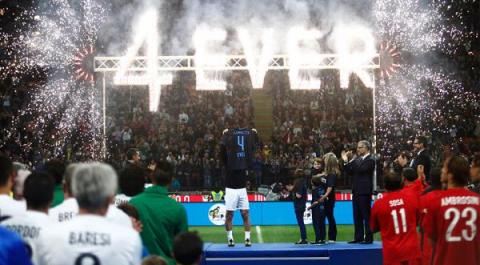 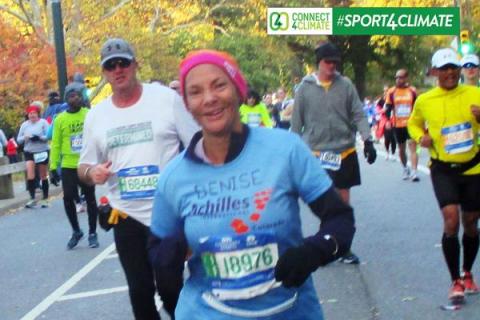