The aim of the European Sustainability Award – Prix Film4Climate is to spotlight a European institution, company, or motion picture for an “outstanding European contribution to sustainability in film.” Connect4Climate partnered with the European Film Academy to make this award a reality.

Beyond celebrating sustainable production techniques behind the scenes, the European Sustainability Award – Prix Film4Climate was conceived to highlight vital messaging in and around movies, showcasing the power of climate- and sustainability-conscious storytelling to drive meaningful behavior change at the personal level and at scale. Each year, the winner of the prize will receive a native tree from the host country, which will be planted locally following the festivities.

The European Green Deal program, which established the firm target of a 55% carbon emissions reduction for the continent by 2030, has wide-ranging implications for all facets of European society, including the arts. The impacts the Green Deal will have across the film industry as it’s implemented by Creative Europe, the EU program supporting the cultural and creative sectors, will be of such magnitude that the decision to award the European Commission with the 2022 Sustainability Award was a natural choice.

Presenting this year’s award was a trio of young Europeans: Raluca from Romania, Ahmad from Sweden, and Vilhjálmur from Iceland. They represent the generation that will be most affected by the action – and inaction – of global leaders today. Two of the presenters, Raluca and Ahmad, are part of the Youth Council co-creating the European Film Club, a program that will encourage teenagers to watch more European films. The Club’s leaders are hard at work planning special film screenings focused on environmental issues including climate change and the biodiversity crisis. The European Film Club, which will officially launch in 2023, will strive to be carbon-neutral.

Watch the presentation of the Sustainability Award – Prix Film4Climate 2022 below!

The European Film Academy is committed to walking the walk when it comes to sustainability. Together with the 2022 host country, Iceland, the European Film Academy is hard at work reducing the carbon footprint of the awards ceremony itself and implementing best practices in resource use, waste management, transportation, and catering. The Academy collected carbon offset donations from those flying to the event and, in partnership with the Icelandic Forestry Association, used them to plant trees in a dedicated European Film Forest.

Iceland itself is a world-renowned leader in sustainability and environmental consciousness. Aiming to achieve climate neutrality by 2040 and go completely fossil fuel-free by 2050, the country is already capable of supplying 100% renewable energy for electricity and heating needs with a mix of hydropower and geothermal sources. The Academy was proud to draw on such impressive regional expertise to deliver the most environmentally friendly experience possible.

Lastly, alongside the awards ceremony, the European Film Academy introduced the Month of European Film, an initiative enabling audiences across Europe to enjoy award-nominated films online and at cinemas in their home countries, both making the Awards more inclusive and obviating excessive travel. Partnerships with sustainability-minded local cinemas take precedence.

Having worked with film industry leaders for years through the Film4Climate initiative, C4C is delighted that the partnership with the European Film Academy led to the establishment of this prestigious Award. The Sustainability Award - Prix Film4Climate embodies the commitment and work of C4C stalwarts Lucia Grenna and Donald Ranvaud, who were early champions of sustainability as a vital ingredient in filmmaking and the creative industries writ large. C4C looks forward to continuing our relationship with the EFA as we keep working toward our mutual mission to advance sustainable practices and messaging across film. 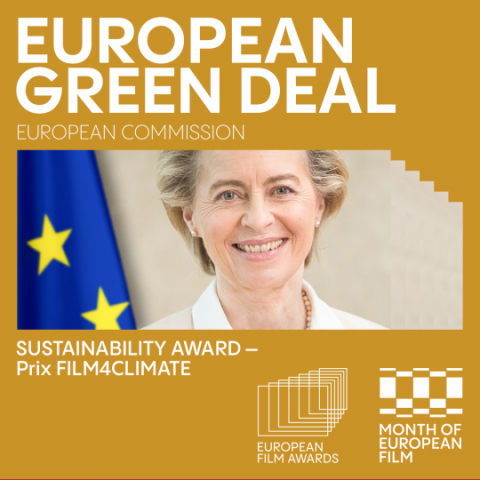