How is the Film Industry Taking on Climate Change?

Can you go to the movies, and leave more knowledgeable about the world’s climate? What is the environmental impact of producing a film, and what could be done to offset it? How are young filmmakers around the world taking on climate change?

If you have been following us at Connect4Climate (C4C), you already know that we work closely with the film and entertainment industry. We’ve hosted workshops and roundtables at major film festivals, the Action4Climate competition for young aspiring filmmakers, and screenings at film festivals all over the world. C4C is on an exciting journey to green the silver screen.

Following the announcement at the Berlinale (Internationale Filmfestspiele Berlin) a few weeks ago, Connect4Climate is happy to share a more details of our event, “Film4Climate: How is the Film Industry Taking on Climate Change?” the first green film forum in Mexico at theGuadalajara International Film Festival (FICG-30), the most prestigious film festival in Latin America, on March 9 – 10, 2015.

We’ll host a series of panel discussions on the role of the film industry in raising climate change awareness that will feature high-profile speakers including actors, filmmakers, scholars, journalists, and industry representatives. We’ll learn about ground-breaking initiatives and best practices in place today, while stimulating new conversations and creating a greater understanding of how the film industry can contribute to raising climate change awareness, mitigating its environmental impact, and promoting behavioral change.

But there’s more: During the Green Film Forum, C4C will also officially launch the Film4Climate global initiative, and announce a series of upcoming events and activities dedicated to greening the silver screen.

Please see the official program below, and join the conversation online on March 9-10 #Film4Climate! 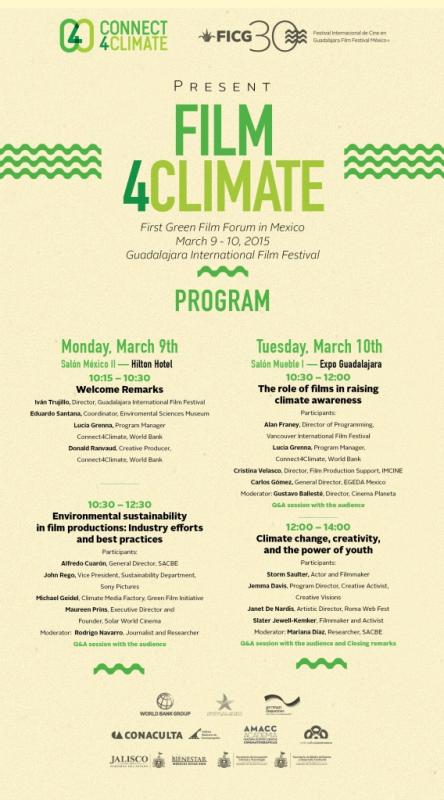