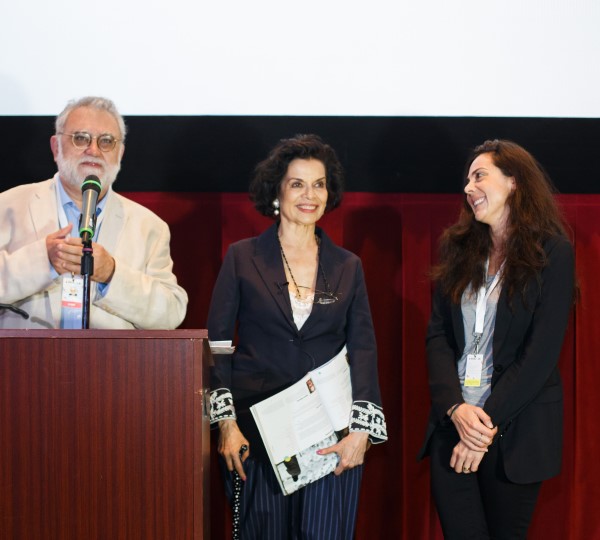 Los Angeles, November 3, 2017 – Today, during the 7th edition of the Guadalajara Film Festival in Los Angeles (FICG in L.A.), Human Rights Defender Bianca Jagger was announced as a Film4Climate Ambassador.

“When I was a film school student in New York, concern over the state of our climate was not much of an issue. We were talking about damage to our environment, the destruction of our tropical forests or the pollution of our waters, but little did we realize the overarching dangers of climate change,” Bianca Jagger noted.

Film4Climate is a global initiative of the World Bank Group’s Connect4Climate program dedicated to advancing environmental sustainability and inclusion of social messages in film and creative visual storytelling. Film4Climate counts on a global network of knowledge partners who are committed to advocacy and action on climate change and social issues, including the Guadalajara International Film Festival.

The Guadalajara International Film Festival is the premier film festival in Latin America, providing a rich forum for creative exchange between professional filmmakers, critics, industry professionals, and students. Each fall, FICG in L.A. brings the best of the festival to the City of Angels, offering Hollywood with a window into the world of contemporary Ibero-American cinema.

“We have seen the amount of talent that comes out of Latin America, and we strongly feel it is important to present it to the rest of the world on a regular basis. What is more, the range of subject matter covered and the strong commitment to exploring universal social concerns makes cinema from South America a real force to be reckoned with” pointed out Festival Director Ivan Trujillo.

The festival presented Bianca Jagger with the “Tree of Life” Award, honoring her many achievements as defender of human rights and a proponent of environmental justice.

“Climate change and human rights are inextricably linked.  The challenges to achieving human dignity for all have been increased exponentially by climate change. This global issue is of particular concern to me because it directly affects human rights. If we don’t tackle climate change now, our efforts to improve people’s everyday lives will be to no avail” she added.

Bianca Jagger has been committed to human rights causes since 1979 when she returned to her native Nicaragua with the International Red Cross while the country was under Somoza’s rule. She is the Founder and President of the Bianca Jagger Human Rights Foundation (BJHRF), and over the years has been presented with many awards acknowledging her work and dedication. She became a Council of Europe Goodwill Ambassador in 2003 and sits on Amnesty International’s Leadership Council.

As a former actress and model, she welcomes the objectives of Film4Climate to use the power of film to reach a global audience in a direct and emotional way.

“This initiative incorporates many of my interests, and it is leading the discussion about climate change and sustainability within the creative industries, encouraging positive action and change in behavior. That is what we need right now – and as fast as possible,” Ms. Jagger reminded the captivated audience.

About FICG in L.A.

FICG in LA is a window into the world of contemporary Mexican and Ibero-American cinema and it is an extension of the Guadalajara Film Festival. This year′s FICG in LA will take place in the historic TCL Chinese Theaters, right in the heart of the worldwide film and entertainment industry. The festival is designed for people to come and explore the diverse regional narratives of Mexican and Ibero-America cinema, and to help critically acclaimed films from these regions reach a wider audience. Los Angeles provides an essential backdrop for the showcase to take place because of its strong cultural ties to Latin American communities all across the globe.

Connect4Climate, also known as the Communication for Climate Change Multi Donor Trust Fund, is the World Bank Group’s global partnership program dedicated to climate change communication. It is supported by the Italian Ministry of Environment, Land and Sea and the German Federal Ministry for Economic Cooperation and Development, along with more than 400 partners including civil society, media networks, international organizations, academic institutions, youth groups and the private sector. Film4Climate is the official Connect4Climate initiative dedicated to greening the silver screen, with more than 160 partners from the global film industry. For more information, and to download the Connect4Climate overview report, please visit: connect4climate.org