At the One Planet Summit convened by President Emmanuel Macron of France, United Nations Secretary General António Guterres, and World Bank Group President Jim Yong Kim, the World Bank Group made a number of new announcements in line with its ongoing support to developing countries for the effective implementation of the Paris Agreement’s goals.

(In exceptional circumstances, consideration will be given to financing upstream gas in the poorest countries where there is a clear benefit in terms of energy access for the poor and the project fits within the countries’ Paris Agreement commitments.)

​  3. Transparency and disclosure to drive our own decarbonization
The World Bank Group is working hard to ensure that climate accountability is mainstreamed throughout its operations. In addition to measures already in place:

i) Starting next year, the World Bank Group will report greenhouse gas emissions from the investment projects it finances in key emissions-producing sectors, such as energy. The results will be published in late 2018, and annually thereafter.

ii) The World Bank will be applying a shadow price on carbon in the economic analysis of all IBRD/IDA projects in key high-emitting sectors where design has begun since July 2017.  IFC started using carbon pricing in key sectors in January 2017 and will mainstream the same starting January 2018.

​  4. Mobilizing Finance for transformation in mitigation and climate resilience
To accelerate the mobilization of finance:

i) IFC will invest up to $325 million in the Green Cornerstone Bond Fund, a partnership with Amundi, to create the largest ever green-bond fund dedicated to emerging markets. This is a $2 billion initiative aiming to deepen local capital markets, and expand and unlock private funding for climate-related projects.  The fund is already subscribed at over $1 billion.

iii) The World Bank Group will continue to support investments highlighted at the One Planet Summit which demonstrate opportunities to crowd in different kinds of finance in transformational areas. This includes accelerating energy efficiency in India; scaling up solar energy in Ethiopia, Pakistan and Senegal among other countries; establishing a West Africa Coastal Areas investment platform to build resilience for coastlines of West African countries (partnering with WAEMU, NDF, GEF, GFDRR, AFD, AfDB); and introducing the City Resilience Platform (partnering with the Global Covenant of Mayors) so that up to 500 cities will have access to finance for resilience to climate change.

iv) The World Bank Group will continue to work with the United Nations and other partners on the implementation of the Invest4Climate platform, which will systematically crowd in multiple sources of finance, with a major event showcasing investment opportunities planned for May 2018 at the Innovate4Climate conference in Frankfurt.

v) IFC will work to set a single unifying global standard on green bonds, similar to the Equator Principles, as a means to facilitate the development of the green bond market to crowd in private finance into climate business. And to stimulate the greening of the financial sector, the World Bank Group will partner with the Sustainable Banking Network (SBN) to provide technical support to develop and implement national Roadmaps for Sustainable Finance in six countries. These roadmaps are based on a framework developed jointly with UN Environment.

​  5. Working in partnership
To further accelerate climate action, the World Bank Group will be working with various partners to deepen climate action:

i) For the first time, all the Multilateral Development Banks and all International Development Finance Club Members issued a joint statement aligning their finance with the Paris Agreement and identifying areas where they will work together to advance climate-smart development.

ii) Canada and the World Bank will work together to accelerate the energy transition in developing countries and, together with the International Trade Union Congress, will provide analysis to support efforts towards a just transition away from coal.

iii) Working with France’s AFD and the Kingdom of Morocco, the World Bank will work to accelerate adaptation in agriculture for Africa.

iv) The World Bank will support a unique partnership between Caribbean leaders and people, multilateral organizations, and local and international private sector to define a vision for the world’s first climate-smart zone. The key priority areas for action include renewable energy, resilient infrastructure, innovative financing, and capacity building.

v) The World Bank Group will support, through the Carbon Pricing Leadership Coalition, the proposed Carbon Markets of the Americas initiative.

vi) The Principles on Blended Concessional Finance, first published in 2013, have been recently enhanced with more detailed guidelines developed by a working group (chaired by IFC) representing Development Finance Initiatives (DFIs) that annually invest more than $35 billion a year in private sector solutions. These principles include promoting commercially sustainable solutions so that the use of scarce public concessional finance is minimized; and state the need for high social, environmental, and governance standards.
Banner photo credits to Ibrahim Ajaja / World Bank

A message sent from the @LaTourEiffel to the world >> There is no plan B because there is no Planet B. we only have #OnePlanet! Protect it.#OnePlanetSummit #ParisAgreement #ClimateAction

"Those who fail to invest in a green economy will be living in a grey future" - @antonioguterres #OnePlanet pic.twitter.com/HVJv0Tq4Uf

We only have #OnePlanet. If we commit the right resources, move boldly & swiftly to harness innovation and drive progress, we can ensure this world remains one we’ll be proud to leave to our children. pic.twitter.com/BJag7kmtfQ

.@EmmanuelMacron: "If we continue thinking that #climatechange is other people's problem we won't be able to fight it. Everyone is an actor. It is your job to make it happen."

"We need the right policies. It is absolutely unacceptable that there are still so many countries subsidizing #fossilfuels." @KGeorgieva Chief Executive Officer @WorldBank #OnePlanet pic.twitter.com/OzYSxjLicr

While there is progress, we are way behind on solving #climatechange. But this is a multi-trillion

market. We should be confident about our ability to be #ClimateSmart.

#Canada Minister of Environment and #climatechange, @cathmckenna >> I'm hugely optimistic! This is where the future is... we have no choice but to accelerate #climateaction and this Summit is a huge opportunity to do it! #OnePlanet pic.twitter.com/LXD9PLTTIL

“40 yrs ago they said bodybuilding was impossible but today there is a gym everywhere. It is the same with #ClimateAction. We will create a clean energy future. Do not listen to the naysayers.” pic.twitter.com/Tyk0q2RO5c

.@MikeBloomberg: "America is half way to achieve its #ParisAgreement commitments. Nothing will stop us. Investors today want to be environmentally friendly. "

"We should leave Paris knowing that we are moving in the right direction"#OnePlanet #OnePlanetSummit pic.twitter.com/jdj9VEI9SE

.@BillGates: "Over the next years we will give 3 hundred million dollars to fight #climatechange. I think we can have a dramatic impact."#OnePlanet #OnePlanetSummit pic.twitter.com/dh6lGC0lXC

"What was agreed on the #ParisAgreement is not enough! This is the moment to put pressure for change. We need to push for more." @antonioguterres #OnePlanet #OnePlanetSummit pic.twitter.com/yfrnV3Xyyx

"#Adaptation will have an enormous cost and if we don't pay this price now the consequences will be terrible."@UN Secretary-General @antonioguterres #OnePlanet #OnePlanetSummit pic.twitter.com/xnXhILLJo2

Minister for International Development Cooperation and

Climate and Deputy Prime Minister #Sweden @IsabellaLovin "We have implemented strict policies on #environment and our economy has grown exponentially. We can do this! #OnePlanetSummit #OnePlanet pic.twitter.com/zz3wRUh2CA

France’s Minister @N_Hulot: We need to make #ClimateAction mainstreamed and progressive to make it socially acceptable. We can use #carbon taxes to grow #climatesmart solutions. #OnePlanetSummit #OnePlanet pic.twitter.com/cTStLiMoq7

"CSOs: our work is incredibly difficult, we have mobilized until certain extense but we are not yet on track to reduce to #GHG. There are many things to do. But we can do it! @JerryBrownGov Governor of #California at #OnePlanet #OnePlanetSummit pic.twitter.com/d08KTq8vYT

Great panel on Scaling up finance for climate action at #OnePlanetSummit with @KGeorgieva from @WorldBank, Mustaffa Bakkoury from @MasenOfficiel and Varsha Purandare from @TheOfficialSBI Capital Markets. Thank you for the great discussion & merci @RaphaelKahane for moderating! pic.twitter.com/99hu8wrz2Z

.@Paris Mayor, @Anne_Hidalgo: #Adaptation should not be seen as a surrender but as an opportunity. #ClimateAction #ParisAgreement #OnePlanet pic.twitter.com/HXmFF9Y3ej 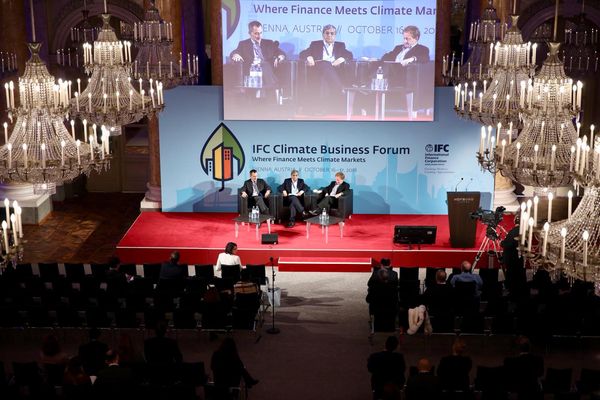