The inspiring slogan of the UN Climate Change conference CCOP23 “Uniting for Climate Action – Further Faster Together” still reverberates in my daily thoughts. The World Bank Group partnered with the Fijian Presidency, the German hosts and numerous partners to spread the message of unity, and the urgent need to increase ambition and action.
See our summary video
The World Bank Group pavilion featured more than thirty Facebook live interviews under the Uniting4Climate message, see the full recordings here. Climate solutions were discussed by global leaders, media and influencers and the program featured World Bank Group related work on transport, energy, forests and landscapes, gender, cities, education and much more. Lord Nicholas Stern emphasized that climate action is fundamentally about “sustainable growth,” largely achieved through investments in climate-smart infrastructure with the participation of the private sector. 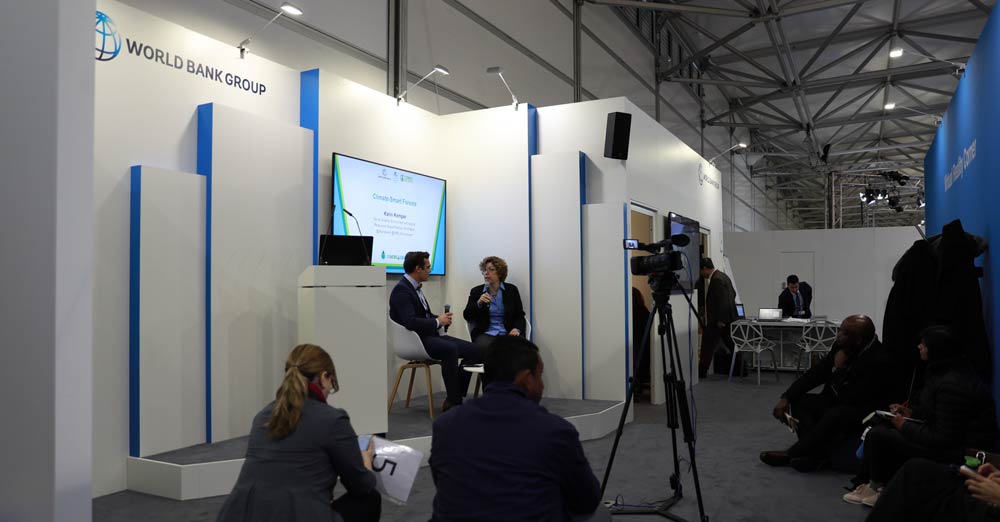 The World Bank Pavilion at COP23. Photo Credits: Kaia Rose/Connect4Climate
On November 6, for the opening of COP23, Minister Inia Seruiratu of Fiji launched the pavilion program conversing with three Pacific Voices in Unison youth climate ambassadors from different Pacific nations. Minister Seruiratu, High-Level Climate Champion for COP23, emphasized that climate change affects all, not only the Pacific Islands, that “we are all in the same boat” with the aim of limiting warming to 1.5C degrees above pre-industrial levels. Key to climate action would be the leadership of young people as exemplified by the Pacific Voices in Unison, who shared their journeys of resilience in light of climate change with personal statements.

Minister Inia Seruiratu at COP23. Photo Credits: Max Thabiso Edkins/Connect4Climate
Youth leadership was celebrated around COP23 under the slogan: Youth Uniting4Climate Action – Further Faster Together. The World Bank’s Connect4Climate program partnered on the Youth Climate Action Awards to highlight that today’s youth are already feeling the impacts of climate change and they are the generation energized to find opportunities in climate action and building a low-carbon resilient future. My message to the youth audience was simple: “As we heard over this conference that the climate is changing rapidly, but that is actually our generation’s biggest opportunity. We are in the midst of a radical ecological and economic transformation that will shape our future and we are a part of the solution.”

Taking on climate change is young generation’s biggest opportunity. Photo Credits: Kaia Rose/Connect4Climate
Climate action is set to be one of our greatest opportunities, with an estimated investment of US$ 90 trillion in new infrastructure needed by 2030, according to the New Climate Economy. Much climate action is already taking place, and solutions were presented and promoted throughout the conference. The Momentum for Change Awards highlighted projects already supporting the achievement of the Paris Agreement, and the Climate Summit for Local and Regional Leaders emphasized action at the local scale.

Momentum For Change Awards Ceremony. Photo Credits: Giulia Camilla Braga
COP23 emphasized the need for climate literacy to help train innovators and technology-developers for the green economy. James Close, Director of Climate Change, World Bank, highlighted: “We need to transform our society and our economy and we all have a role to play. Education gives us the opportunity to touch young minds and frame their thinking and problem-solving by giving them tools, evidence and data to come up with their own conclusions about what to do and how to do it.”

James Close, Director of Climate Change, World Bank. Photo Credits: Max Thabiso Edkins/Connect4Climate
Numerous activities happening in parallel to COP23, such as Hack4Climate, Sustainable Innovation Forum, United for Efficiency and others, helped underline the need to connect, raise ambition, and support the advancement of solutions within everybody’s sphere of influence. This was also made clear to the public at the KlimaTour event hosted by the City of Bonn and at the Climate Planet exhibit promoted under the #Uniting4Climate hashtag.

Minister Inia Seruiratu biked to the COP23 venue within the KlimaTour initiative. Photo Credits: Max Thabiso Edkins/Connect4Climate
Not only did we connect with audiences in Bonn, we also brought the voices and culture of Fiji to COP23 with two Fiji Live to COP23: Uniting for Climate Action broadcasts on the COP23 Facebook page during the high-level days, November 15 and 16. As a historical first the live shows were shown on all screens across the COP venues, including in the Plenary, and were watched more than 100,000 times. Hosted by Fiji’s Youth Climate Ambassador and Miss Pacific Islands, Anne Dunn, and featuring a special address by the Fijian President, George Konrote, the shows underscored the urgent need for the negotiations to support ambitious climate action.

Prime Minister of Fiji, Frank Bainimarama. Photo Credits: Max Thabiso Edkins/Connect4Climate
Having felt the energy and vigor behind the “Uniting for Climate Action – Further Faster Together” slogan I repeat the words of Prime Minister of Fiji, Frank Bainimarama: “We don’t need to fear the future if we have courage to act now.”
The world has embarked on an unstoppable movement to building a low-carbon resilient future, supported by all sectors of society, across all parts of the globe. Act now, uniting for climate action to protect our one planet!
Check our COP23 Facebook Live recordings

Watch our video highlights from COP23:

We are Uniting for Climate Action at COP23:

We are Uniting for Climate Action – Further Faster Together (COP23 Recap):

#QuoteOfTheDay: The fight against climate change is the major combat of our times. The #ParisAgreement is a starting point that we will not stop @EmmanuelMacron #COP23 #Uniting4Climate pic.twitter.com/xLX1iL58nY

We ned to transform our society & our economy to deal with #climatechange. We all have a role to play. Have to communicate the opportunity to 10 friends, and they talk to 10 and 10 more…let’s do it through education. - James Close @WorldBank #EduDay #COP23 #Uniting4Climate pic.twitter.com/B8c6YasBft

"Governments alone will not be able to deliver. It's only with the involvement of all stakeholders that we can succeed. We need to do more. Way more." @antonioguterres #COP23 #Uniting4Climate pic.twitter.com/omOUvH2W6z

“Addressing #climatechange cannot be a top down process, it takes cities, businesses, initiatives, organizations & individuals to work towards #climateaction; that’s what @Momentum_UNFCCC is all about, celebrating them!” @PEspinosaC #Uniting4Climate #COP23 #Innovate4Climate pic.twitter.com/bIvuOtGIG8

“Here is hope in the #Bonn Zone, because there is passition commitment & #Action” @SeruiratuCOP23 for #Global #ClimateAction Agenda closing at #COP23 “We need to develop #climate-smart, low-carbon & without compromising the future. We are #Uniting4Climate Further Faster Together” pic.twitter.com/rrDii20Mbj

.@JohnARoome @WBG_Climate >> #COP24 #Poland is going to be a very important because it will start setting the stage for greater ambition on the #NDCs for the stocktake to try and drive this ambition forward! #Uniting4Climate #COP23 pic.twitter.com/iWmPHT5vJY

“Our development plans must be #climate sensitized” - #Fiji launch their 5-year Development Plan at #COP23. “We cannot leave any Fijians behind.”

Ingrid-Gabriela Hoven @BMZ_Bund "We have to step up, scale up to support developing countries tackling #climatechange" #Uniting4Climate #COP23 pic.twitter.com/MjiiMVSo3d

.@TomSteyer: #Climatechange is not an intellectual exercise, people’s lives are at stake! We need a broad coalition for sustainable #innovation. We need to all get together! #SIF17 #COP23 #Uniting4Climate pic.twitter.com/Ke3PODzxRv

“I never pay much attention to the doubters and no-sayers. I have been known as a #Action hero. I am not going to wait on #ClimateAction or on #Pollution.” @Schwarzenegger “We put the fire out! Act now!” #Uniting4Climate #COP23 https://t.co/oGIl5QpTaV pic.twitter.com/wa8Efmc2Ce

Mayors committed to #ClimateAction at all levels. “We are key players in the fight against #climatechange” #Uniting4Climate at #COP23 for the Climate Summit of Local and Regional Leaders.

“Let’s get serious about #ClimateJustice at #COP23!” - @climatemorgan

“We need a big further boost to #renewables” Turner

“Germany needs to deliver as a front-runner.” Flasbarth

.@Bloomberg commits to $50 million to #EndCoal: #RenewableEnergy is on the rise globally! #TalanoaSpace #COP23 #Uniting4Climate “Call your representative to get rid of coal now!” @MikeBloomberg “Stand up for a better life for us, our grandchildren.” pic.twitter.com/nCkTSzgXwh

“Nobody should have to live in fear in there places that they call home!” @VarshPrakash on #climate impacts at #TalanoaSpace #Uniting4Climate at #COP23 #ClimateAction pic.twitter.com/139BxsCLP9

.@rosariodawson: "Time to stand up and recognize that the environment is extremely important" #COP23 #Uniting4Climate pic.twitter.com/6gFvJmRd1D

We all have a role to play in tackling climate change. Here's how some #COP23 attendees are reducing their footprint @PEspinosaC @COP23 pic.twitter.com/V45WKLPo1Q 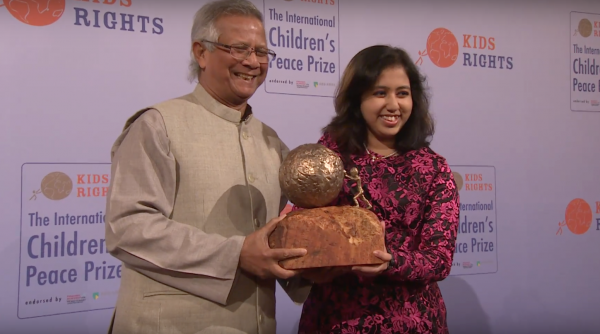