World Bank Group President Jim Yong Kim
One Planet Summit
Paris, France
As Prepared for Delivery
Good afternoon. Let me start by thanking President Macron and Secretary-General Guterres for their global leadership on climate change. It’s an honor to co-host this summit with them, to focus on increasing finance and momentum between COP-23 and COP-24.
And I’d like to thank the Government of France for continuing to strengthen the spirit that led to the Paris Agreement. Two years ago, we came together in this city and declared that climate change is a “common concern of humankind,” and we affirmed our collective determination to “respond to the urgent threat of climate change.”
We’re here at this extraordinary event to raise our collective ambitions for speed and scale. Every day, climate change becomes a more urgent economic, social, and existential threat to all countries and all people. We need investments in the trillions – not billions – to have any hope of keeping the commitments we made here two years ago. That’s what this summit is all about.
During the lunch break, many of you participated in the “Climate Agora” – a marketplace showcasing some new financing models and innovation for climate action. Multiple partners are bringing together deals with different kinds of finance in new policy and institutional environments.
Let me share four deals that were discussed:

​  The first deal is with Energy Efficiency Services Limited, or EESL – a company that finances residential and public sector energy efficiency investments in India. EESL has already deployed more than 275 million LED bulbs, 4.2 million LED tube lights, and 4 million street lights in municipalities throughout India. Through an innovative bulk procurement business model, EESL has driven down prices to make climate-smart LED bulbs as affordable as conventional bulbs, saving energy costs for customers. Early next year, EESL will use a 220 million dollar World Bank (IBRD) loan, combined with an 80 million dollar guarantee facility, and leverage 200 million dollars of commercial finance to deploy thousands of electric cars and charging stations and millions of smart meters throughout India.

​  The second deal is on Indonesia Geothermal – a Resource Risk Mitigation Facility, established by the Government of Indonesia with support from the World Bank and other partners. The Facility will provide concessional funding and grants to pool and reduce the exposure of developers in the early exploration and drilling phases of geothermal projects. With a 150 million dollar investment from the Government of Indonesia and 325 million dollars in concessional financing, Indonesia Geothermal is expected to leverage up to four billion dollars in private sector funding to develop more than one gigawatt of new thermal capacity, which is part of Indonesia’s target to add 5.8 gigawatts of geothermal power generation by 2026.

​  The third deal is with the new City Resilience Program – or CRP, where we’re partnering with the Global Covenant of Mayors to bring together the largest global alliance of cities committed to tackling climate change. CRP will design and structure climate resilient investments and catalyze new sources of capital to finance them. Over the next three years, the CRP will leverage 4.5 billion dollars in World Bank loans to catalyze billions in public and private capital for technical assistance, project co-financing, and credit enhancement. Essentially, the program will act as an investment banker for cities to structure programs that address their vulnerabilities to climate change. The first phase is starting with more than 30 cities, with the goal of scaling to more than 500 cities in the next decade.

​  The fourth deal is the West African Coastal Areas Management Program, or WACA, which targets 17 West African countries with the goal of crowding-in two billion dollars to tackle coastal erosion, flooding, and climate change adaptation. The city of St Louis in Senegal will be one of the first beneficiaries. An initial 215 million dollar package that includes 180 million dollars from our IDA fund for the poorest countries, 20 million dollars from the Global Environment Facility (GEF), and nine million dollars from the Nordic Development Fund (NDF) will be presented to the World Bank Board early next year. Then we expect further public and private investments will be mobilized, including, for example, financing for tourism operations.
These are just some of the deals presented at the “Climate Agora” today. At the World Bank Group, we’re working with partners to leverage all of the financial mechanisms at our disposal – concessional finance, green bonds, blended finance, and risk-mitigation instruments – to fund climate-smart projects like these, and to set the conditions to get market forces moving in the right direction. 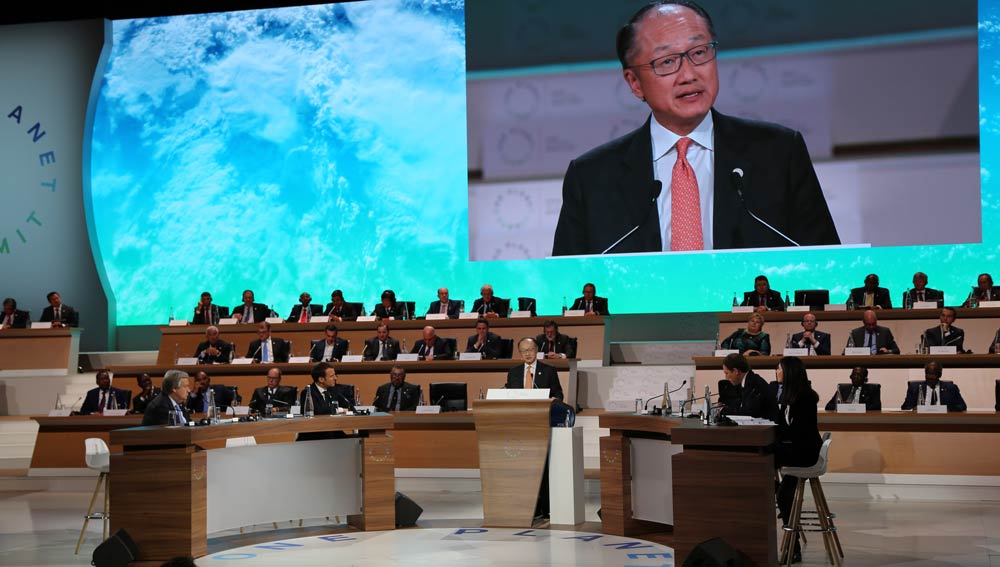 Jim Yong Kim at One Planet Summit. Photo Credits: Ibrahim Ajaja / World Bank
Although it wasn’t highlighted at today at the Agora, we’re seeing that our interventions in the solar sector are well received by governments and by markets. A year ago we helped the Government of Zambia prepare a solar auction, which achieved some of the lowest electricity tariffs on the African continent. And the first project was just financed by the market.
Similarly, we helped the Government of Argentina to prepare its first Renewables auction, Renovar. I’m very pleased to announce that the financing for the first project closed recently. What’s needed, in many cases, is the standardization of contracts, power purchase agreements, and financing documents. Based on this experience, we’re developing similar support for renewables in Senegal, Ethiopia, Pakistan and elsewhere.
But we need to go beyond individual projects. Each of these deals has enormous potential to be scaled up and replicated. To meet the Paris Agreement objectives, we need to get to that scale.
None of these critical investments will be possible unless we get the policies right. That means creating incentives for change – removing fossil fuel subsidies, introducing carbon pricing, increasing energy efficiency standards, and implementing auctions for lowest cost renewable energy.
And we need to take an integrated view and work together. This weekend, Caribbean leaders committed to collectively define a vision for the world’s first climate-smart zone covering renewable energy, resilient infrastructure, innovative financing, and capacity building. This calls for a unique partnership between the Caribbean leaders and people, multilateral organizations, and the local and international private sectors.  We’re honored to join efforts to support the Caribbean countries and help them achieve this vision.
As a global multilateral development institution, the World Bank Group is continuing to transform its own operations in recognition of a rapidly changing world.  To ensure alignment of our support to countries to meet their Paris goals, today we are announcing that the World Bank Group will no longer finance upstream oil and gas, after 2019.
In exceptional circumstances, consideration will be given to financing upstream gas in the poorest countries where there is a clear benefit in terms of energy access for the poor and the project fits within the countries’ Paris Agreement commitments.
We’re determined to work with all of you to put the right policies in place, get market forces moving in the right direction, put the money on the table, and accelerate action. That’s the only way we can meet the commitments we made two years ago, and finally begin to win the battle against climate change.
Thank you. 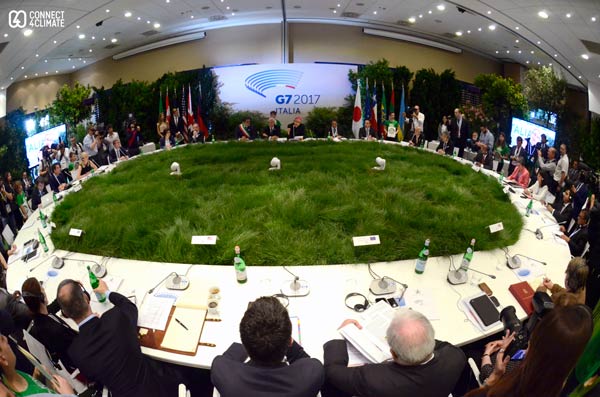