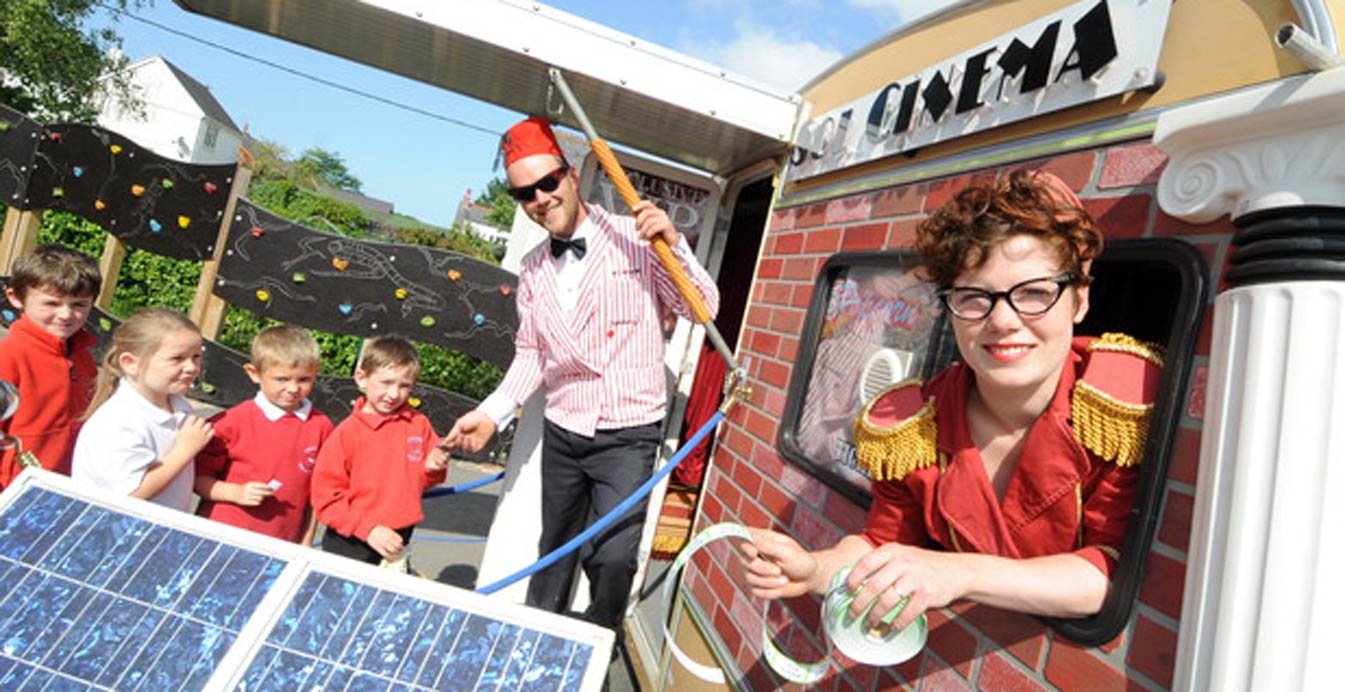 The BBC dubbed the mobile movie theatre as the 'World's smallest solar cinema' and the British Film Institute wrote 'Sol Cinema is a perfect showcase for how technology can support sustainability' 2010, Dublin city center and the first eight people of what would become thousands walked down the red carpet and entered the Sol Cinema.
The tiny cinema on wheels appeals to all ages, nationalities, and backgrounds. Environmentalists applaud their use of low powered solar technology. Cinema and film lovers get excited about the intimate experience Caravan, and RV lovers drool over the lavish and comfortable interior. 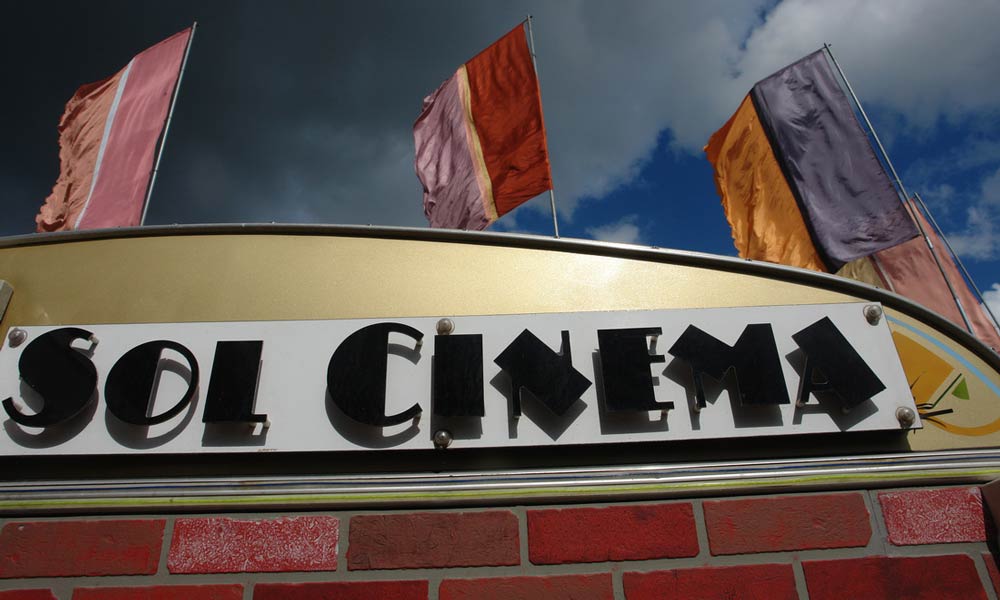 Photo Credit: Sol Cinema
Complete with vintage attired usherettes and ushers, the Sol Cinema has been touring all over Ireland and the United Kingdom ever since. Designed for short movies, the unique cinema has captured the imagination and delighted people across a diverse range of events. Music festivals, community events, billionaires’ private parties, factories, and sports events are just some of the ways which the Sol Cinema has successfully linked sustainability with the world of film.
The concept was a collaboration of artists and a filmmaker. When artist Jo Furlong saw an old Euro-caravan rusting away in a hedge, he knew exactly what he would do. His previous project had converted a small caravan into a touring human-sized jukebox for his band. The Dukes Box has become a cult favorite at festivals across the UK. 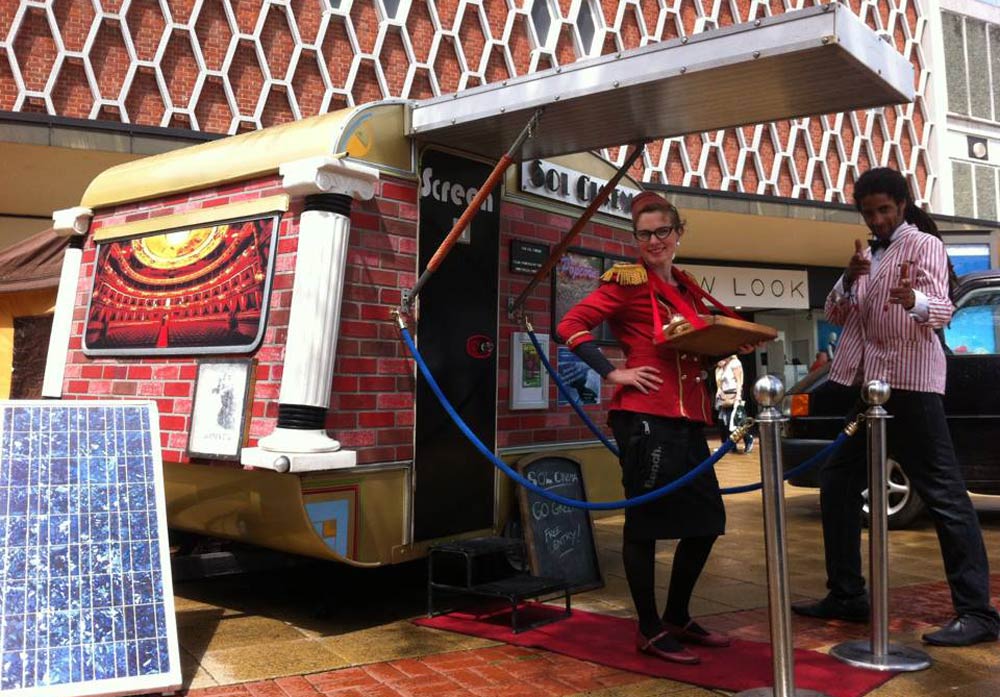 Photo Credit: Sol Cinema
His latest creation would involve Paul O’Connor, a filmmaker and together they created Sol Cinema- the Worlds’ smallest solar powered picture house. Paul had been seeking a unique way to show short films at festivals, and this was the perfect solution. He wanted to find a way to present short films which went beyond YouTube. He wanted to give an enjoyable experience to honor all the hard work and dedication which video makers put into creating their short videos "The Sol Cinema took a full year to build after one year of head scratching and working our way through many different designs. We began as a mobile projection box before we realized that it would be more fun if the audience could actually be inside the projection box during daytime showings. Then we thought about including the vintage decor, the plush seats, smartly dressed usherettes and of course the popcorn", Paul and Jo explain. "Getting the solar element just right took the longest to work out.  We invested in 3 power pack batteries sealed in waterproof Housings and with 360w PV panels we were ready to go. Everything in the cinema was made to work off 12V which allows us to save energy. The majority of our performances are in Summer and during the day. We decided to tap into that energy source - a nearly perfect sphere of hot plasma. Its diameter is 109 times that of Earth, and despite the British weather, we figured it could power a mobile cinema. Yes, we were going to use the Sun!" 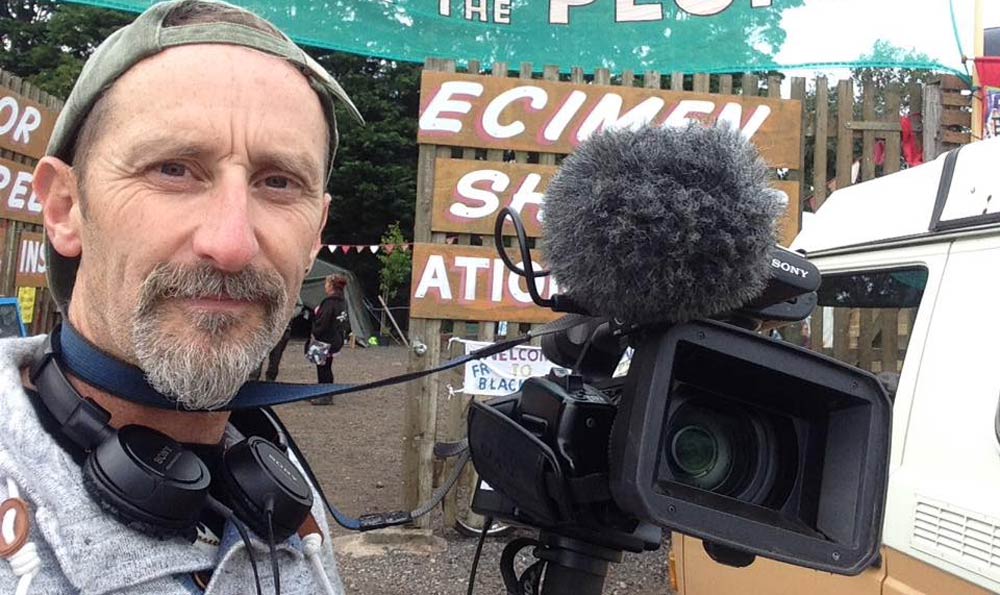 Paul O'Connor
Running entirely on solar power allows us to perform anywhere and at anytime. Plugging into the sun means events don't have to run power cables for us, so they sometimes site us in the most bizarre places. We have performed in forests, a factory, a graveyard, shopping centers, fields, the suburbs, city streets and even a zoo...."
Total Film magazine heaped praise on the little picture house writing 'There is something very commendable about creating a fully solar-powered mobile cinema'. The crew also used mostly recycled materials, including the caravan itself of course. They recycled carpets from a wedding marquee hire company. Their LED projector housing is a former 1920s theatre light. The red curtains were donated by an antique collector.
Amazement is the most common reaction. They benefit from the ‘Tardis effect’ when audiences leave - people outside can’t believe so many people can comfortably be seated in the Sol Cinema.  Laughter and smiles are generally the all-round reactions for the cinema of the sun.
More details about Sol Cinema here.