Some time ago, I went surfing in Madagascar, the country most people only know from the animated movie. In contrast to the movie, it's one of the 10 least fortunate countries in the world. When making my way to the coast I met several young boys that had to spent hours each day to fetch water for their families. As a water engineer, I tested the water and confirmed the non- potability. However, they were left with no choice. For these boys and their families, water literally means life. It also means no opportunity to go to school and a reduced life expectancy. A few hours later, I found myself drifting in the endless sea upon my surfboard under the abundant sunshine. At that moment, I realized the unlimited resources of the sea and sun would have to be part of the solution for water scarcity.
Already today, 2/3 of the world population faces water shortages. This means 4 billion people that are affected by the shortage of water. Water is not only the water we enjoy in our daily lives, our household water use only contributes to 1% of our water footprint. The remainder is determined by the food we eat, the products we buy and the energy we use. Scarcity of water involves pressure on food supply, production of goods and often results in tension, migration and the possibility of conflict. By using more water than we receive, our aquifers, rivers, and lakes are disappearing; more than half of the world wetlands have already disappeared. Adding climate change to the equation, water to me is the biggest challenge for humanity in the 21st century.
I have devoted my professional life to working on sustainable solutions. As an engineer, I was able to design innovation to couple renewable energy to desalination, to make drinking water from seawater using the sun. Past 5 years I spent building a company based on this technology to solve freshwater scarcity, using only the sea, sun, earth & wind. 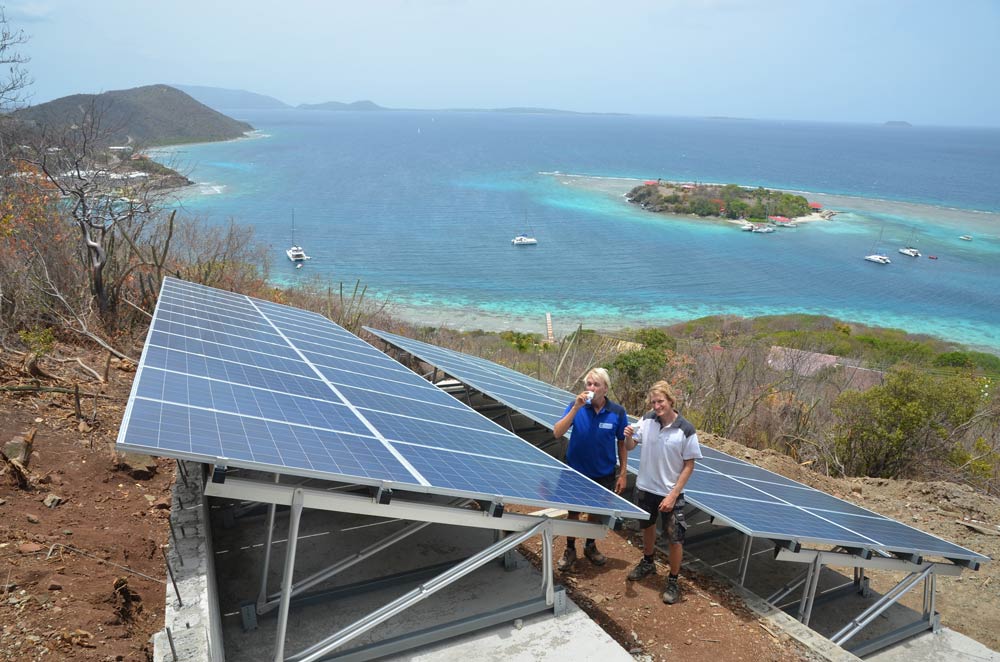 Sid Vollebregt (left) and Reinoud Feenstra, founders of Elemental Water Makers
Desalination is an energy-intensive solution to cope with fresh water scarcity. Currently, almost 1% of the global electricity consumption is used for desalination, which doesn't even supply 0.5% of our water. Imagine if we will have to rely on desalination more often. The exhaust of carbon dioxide emissions of the fossil, driven industry of desalination would only increase the water scarcity by accelerating climate change. Therefore, the key to a sustainable water supply lies in the coupling of desalination and renewable energy. Elemental Water Makers (2012) has found a scalable, proven, and mature solution to couple a constant desalination process using only renewable energy, without the use of batteries.
Elemental Water Makers ensures fresh water today, without limiting tomorrow. We enable affordable fresh water from seawater, using only the sun, wind, or waves. We provide desalination solutions driven by renewable energy for resorts, municipalities, private islands, communities, and industries on, water scarce islands and coastal regions. The result is an affordable & reliable water supply from unlimited resources.
Through the projects we deliver, we make a direct impact on the availability of water, without contributing to any extra emissions of greenhouse gasses.
We are active on 4 continents. Recently, we have been awarded the MBR Global Water Award by the Deputy Ruler of Dubai. Out of almost 140 organizations active in desalination driven by renewable energy, we were selected for the 1st prize with a project we executed on the British Virgin Islands in 2015. This is a huge step, but there is so much more work to be done. I believe water scarcity is the biggest challenge for humanity in the 21st century. I’m convinced that this brings opportunity and that we can move from scarcity to abundance. I hope you will join me in solving fresh water scarcity, using only the sea, sun, earth & wind.