Turn Down the Heat: Confronting the New Climate Normal 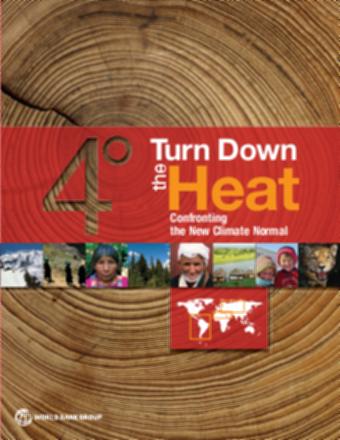 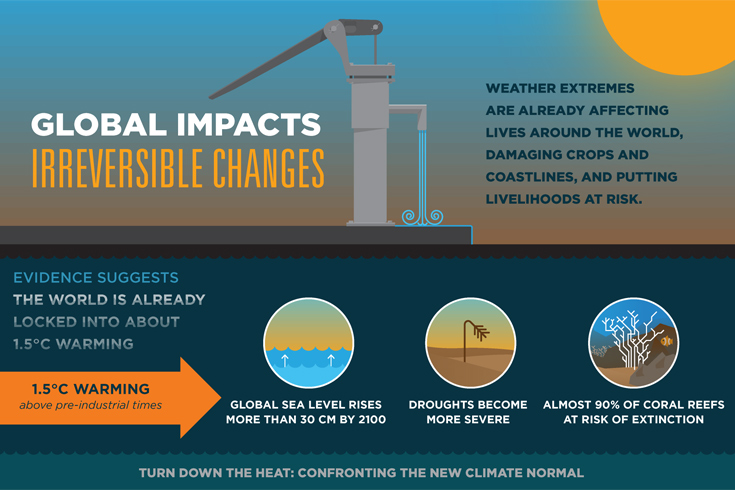 In the Andes of South America and across the mountains of Central Asia, glaciers are receding. As temperatures continue to warm, melting glaciers will raise the risks of damaging floods. Within a few decades, however, the risk of flood will become risk of drought. Without action to stop the drivers of climate change, most of the Andean glaciers could be gone by the end of the century, leaving farms and cities without a critical source of water. These changes are already underway and the impact on food security, water supplies and livelihoods is just beginning.

The latest Turn Down the Heat report explores the impact of climate change in Latin America and the Caribbean, the Middle East and North Africa, and Eastern Europe and Central Asia and finds that warming of close to 1.5°C above pre-industrial times is already locked into the Earth’s atmospheric system by past and predicted greenhouse gas emissions. Without concerted action to reduce emissions, the planet is on pace for 2°C warming by mid-century and 4°C or more by the time today’s teenagers are in their 80s.

The report warns that as temperatures rise, heat extremes on par with the heat waves in the United States in 2012 and Russia in 2010 will become more common. Melting permafrost will release methane, a powerful greenhouse gas that will drive more warming in a dangerous feedback loop. Forests, including the Amazon, are also at risk. A world of even 1.5°C will mean more severe droughts and global sea level rise, increasing the risk of damage from storm surges and crop loss and raising the cost of adaptation for millions of people.

Already indigenous communities in Panama are planning to relocate due to sea level rise, as shown in Patrick Riggs' documentary.

“Past emissions have set an unavoidable course of warming over the next two decades, which will affect the world’s poorest and most vulnerable people the most. We cannot continue down the current path of unchecked, growing emissions.” -World Bank Group President Jim Yong Kim

As governments gather in Lima for the next round of climate negotiations, this report and others provide direction and evidence of the risks and the need for ambitious goals to decarbonize economies now.

Turn Down The Heat Warnings: Latin America and the Caribbean 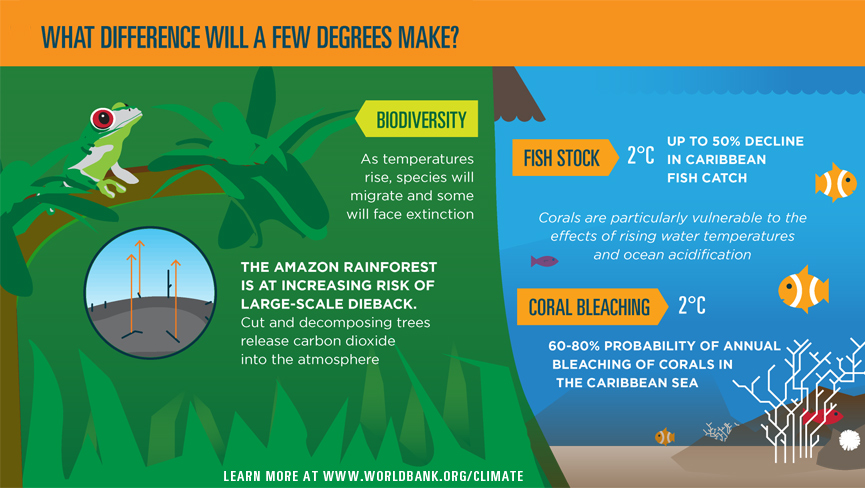 In Latin America and the Caribbean, the report warns of longer droughts, extreme weather, and increasing ocean acidification.

In the tropical Andes, rising temperatures will reduce the annual build-up of glacier ice and the spring meltwater that some 50 million people in the low-land farms and cities rely on. Heat and drought stress will substantially increase the risk of large-scale forest loss, affecting Amazon ecosystems and biodiversity, as well as the forests’ ability to store carbon dioxide.

Rising temperatures also affect food security. The oceans, which have absorbed about 30 percent of all human-caused carbon dioxide so far, will continue to acidify and warm, damaging coral ecosystems where sea life thrives and sending fish migrating to cooler waters. The result for the Caribbean could be the loss of up to 50 percent of its current catch volume. Managing our marine resources is crucial; see Action4Climate film La Tirana.

Turn Down The Heat Warnings: Middle East and North Africa 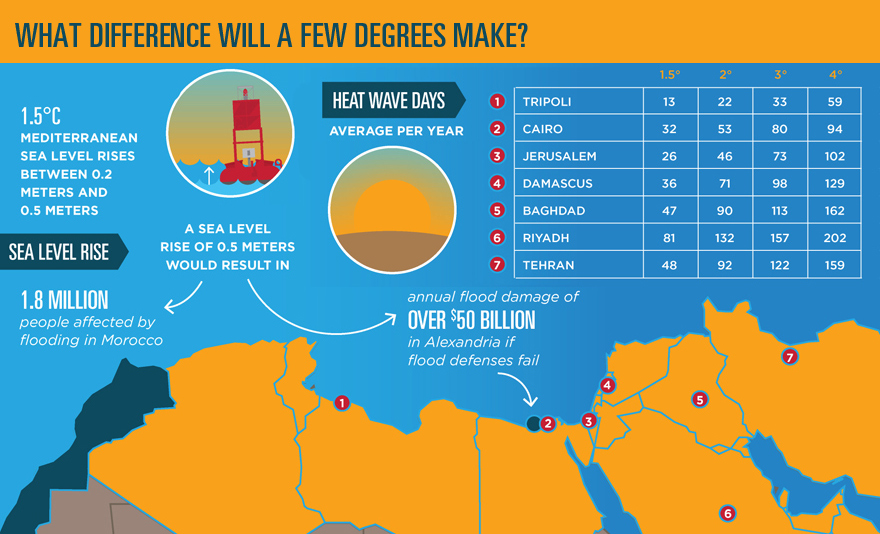 People in the Middle East and North Africa have been adapting to extreme heat for centuries, but the report warns of unprecedented impact as temperatures continue to rise. Extreme heat will spread across more of the land for longer periods of time, making some regions unlivable and reducing growing areas for agriculture.

Cities will feel an increasing heat island effect, so that by 4°C warming – possibly as early as the 2080s without action to slow climate change – most capital cities in the Middle East could face four months of exceedingly hot days every year. Action is needed to reduce the threat multiplier of climate change, desertification will have to be managed, as is being done in Mongolia (see theAction4Climate film At the Desert’s Edge).

Turn Down The Heat Warnings: Eastern Europe and Central Asia 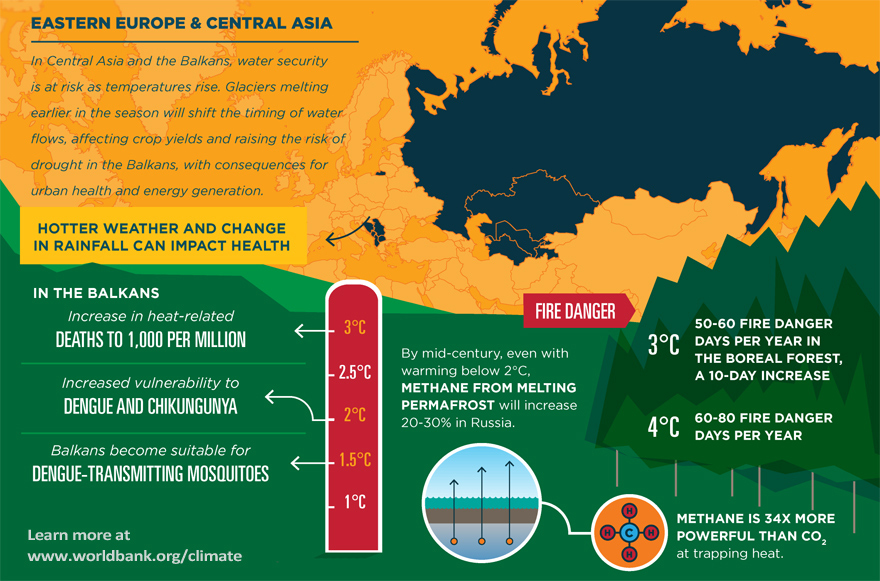 In Eastern Europe and Central Asia, the report shows how the impact of climate change will vary region to region. Melting glaciers and warming temperatures will shift the growing season and the flow of glacier-fed rivers further into spring in Central Asia, while in the Balkans in Eastern Europe, worsening drought conditions will put crops at risk. Adapting to these changes will be necessary, as highlighted in the Action4Climate film Adaptation looking at the changes in the mountains of Uzbekistan.

Rising temperatures also increase the thawing of permafrost, which releases methane, a potent greenhouse gas many times more powerful than carbon dioxide at trapping heat. By mid-century, if temperatures continue to rise toward 2°C, the release of methane from thawing permafrost is likely to increase 20 to 30 percent in Russia, creating a feedback loop that will drive climate change.

Take action on climate change to reduce the risk

“The good news is that there is a growing consensus on what it will take to make changes to the unsustainable path we are currently on,” World Bank Group President Kim said. “Action on climate change does not have to come at the expense of economic growth.”

Support for investments in energy efficiency and renewable energy to help countries lower their emissions while growing their economies is necessary, as is clean transportation that can put fast-growing cities onto more sustainable growth paths.

Governments need to design policies that support clean growth, including developing efficiency standards, reducing fossil fuel subsidies, and pricing carbon. It is also clear that the public sector cannot solve the climate challenge alone – private investment and smart business choices are crucial, but business leaders have emphasized that they need governments to provide clear, consistent policy direction that reflects the true costs of emissions. Leaders need to act, and we need to make sure they act.

“Our response to the challenge of climate change will define the legacy of our generation,” President Kim said. “The stakes have never been higher.”