Regular food shortages in Sub-Saharan Africa….shifting rain patterns in South Asia leaving some parts under water and others without enough water for power generation, irrigation, or drinking….degradation and loss of reefs in South East Asia resulting in reduced fish stocks and coastal communities and cities more vulnerable to increasingly violent storms….these are but a few of the likely impacts of a possible global temperature rise of 2 degrees Celsius[1] in the next few decades that threatens to trap millions of people in poverty, according to a new scientific report released today by the World Bank Group.

Down the Heat: Climate Extremes, Regional Impacts, and the Case for Resilience builds on a World Bank report released late last year, which concluded the world would warm by 4 degrees Celsius[2] (4°C or 7.2 degrees Fahrenheit) above pre-industrial levels by the end of this century if we did not take concerted action now. This new report looks at the likely impacts of present day, 2°C and 4°C warming on agricultural production, water resources, coastal ecosystems and cities across Sub-Saharan Africa, South Asia and South East Asia.

"This new report outlines an alarming scenario for the days and years ahead – what we could face in our lifetime," said World Bank Group President Jim Yong Kim. "The scientists tell us that if the world warms by 2°C -- warming which may be reached in 20 to 30 years -- that will cause widespread food shortages, unprecedented heat-waves, and more intense cyclones. In the near-term, climate change, which is already unfolding, could batter the slums even more and greatly harm the lives and the hopes of individuals and families who have had little hand in raising the Earth's temperature."

"These changes forecast for the tropics illustrate the level of hardships that will be inflicted on all regions eventually, it we fail to keep warming under control," Kim said. "Urgent action is needed to not only reduce greenhouse gas emissions, but also to help countries prepare for a world of dramatic climate and weather extremes."

The report, prepared for the World Bank by the Potsdam Institute for Climate Impact Research and Climate Analytics, reveals how rising global temperatures are increasingly threatening the health and livelihoods of the most vulnerable populations, crucially magnifying problems each region is struggling with today.

Turn Down the Heat: Climate Extremes, Regional Impacts, and the Case for Resilience is an analysis of the latest climate science, as a means to better understand the risks of climate change to development. Key findings include:

In Sub-Saharan Africa, by the 2030s droughts and heat will leave 40 percent of the land now growing maize unable to support that crop, while rising temperatures could cause major loss of savanna grasslands threatening pastoral livelihoods. By the 2050s, depending on the sub-region, the proportion of the population undernourished is projected to increase by 25-90 percent compared to the present. 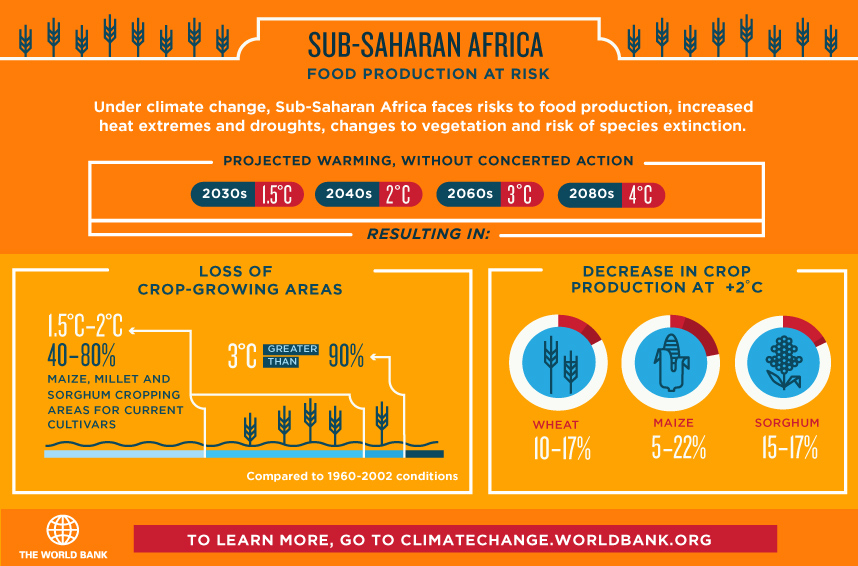 In South Asia, the potential change in the regularity and impact of the all-important monsoon could precipitate a major crisis in the region. Events like the devastating Pakistan floods of 2010, which affected more than 20 million people, could become common place. More extreme droughts in large parts of India could lead to widespread food shortages and hardship.

And across all the regions, the likely movement of impacted communities into urban areas could lead to ever higher numbers of people in informal settlements being exposed to heat waves, flooding, and diseases.

The report says impacts across its study regions are potentially devastating. And, if warming goes from 2ºC to 4°C, multiple threats of increasing extreme heat waves, sea–level rise, more severe storms, droughts and floods would have severe negative implications for the poorest and most vulnerable. It notes, however, that many of the worst consequences could still be avoided by holding warming below 2ºC.

"I do not believe the poor are condemned to the future scientists envision in this report. In fact, I am convinced we can reduce poverty even in a world severely challenged by climate change," President Kim continued. "We can help cities grow clean and climate resilient, develop climate smart agriculture practices, and find innovative ways to improve both energy efficiency and the performance of renewable energies. We can work with countries to roll back harmful fossil fuel subsidies and help put the policies in place that will eventually lead to a stable price on carbon."

See the full infographic from the World Bank.

"We are determined to work with countries to find solutions," Kim said. "But, the science is clear. There can be no substitute for aggressive national mitigation targets, and the burden of emissions reductions lies with a few large economies."

The report says sea level rise has been occurring more rapidly than previously projected and a rise of as much as 50 cm by the 2050s may already be unavoidable as a result of past emissions. In some cases, impacts could be felt much earlier. For example, without adaptation measures, sea level rise of 15 cm, coupled with more intense cyclones, threatens to inundate much of Bangkok by the 2030s.

The burgeoning cities of the developing world are identified as some of the places on the planet most at risk from climate change. Describing urban areas as "new clusters of vulnerability," the report says urban dwellers, particularly the urban poor, face significant vulnerability to climate change.

Informal settlements in places like Metro Manila in the Philippines and Kolkata in India concentrate large populations and often lack basic services, such as electricity, sanitation, health, infastructure, and durable housing. In such areas, people are highly exposed to extremen weather events, such as storms and flooding. Extreme heat is also felt more acutely in cities.

Partly in response to the findings of the two Turn Down the Heat reports, the World Bank Group is stepping up its mitigation, adaptation, and disaster risk management work, and will increasingly look at all its business through a "climate lens."

Today, the Bank is helping 130 countries take action on climate change. Last year, it doubled its financial lending that contributes to adaptation. Increasingly, the Bank is supporting action on the ground to finance the kind of projects that help the poor grow their way out of poverty, increase their resilience to climate change, and achieve emission reductions. 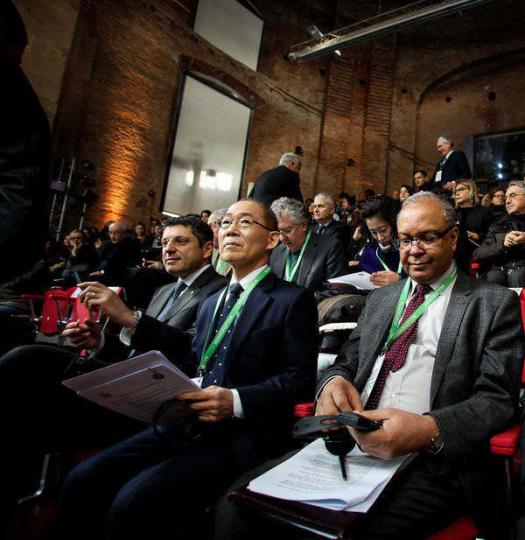