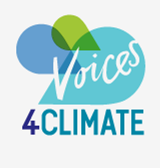 Washington, June 28, 2012 – So, what does climate change mean to you? This is the question Connect4Climate (C4C) and MTV will be asking young people from around the world at the launch of "Voices4Climate", a new global photo, video, and music video competition focused on amplifying the voices of youth on the issue of climate change. The launch for the competition will be held tonight, June 28, at an event titled “Connecting for Climate: Technology, Creativity, and Action” at the Newseum in Washington, DC.

Creative young people from around the world will be invited to share or sing their personal stories about climate change for the chance to win prizes and receive international recognition at the December 2012 UN Conference on Climate Change in Doha. Music video winners will spend a day with MTV editors in New York or London and have their music videos featured on MTV’s ‘Voices’ platform.