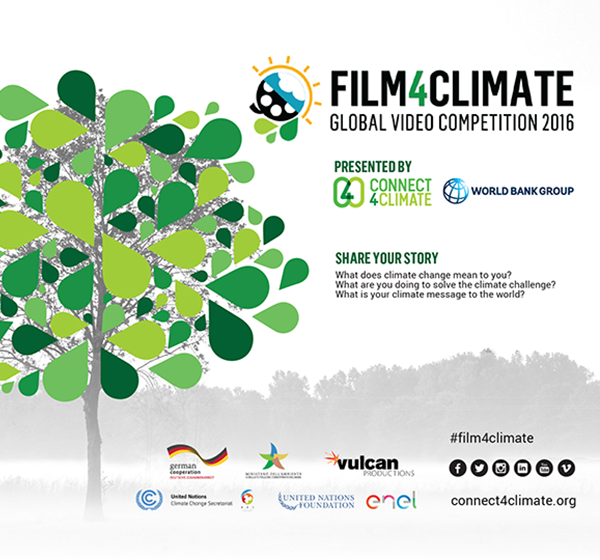 Winners of the Film4Climate Global Video Competition will be announced at an official awards event at the COP 22 climate summit in Marrakech, Morocco in November 2016. 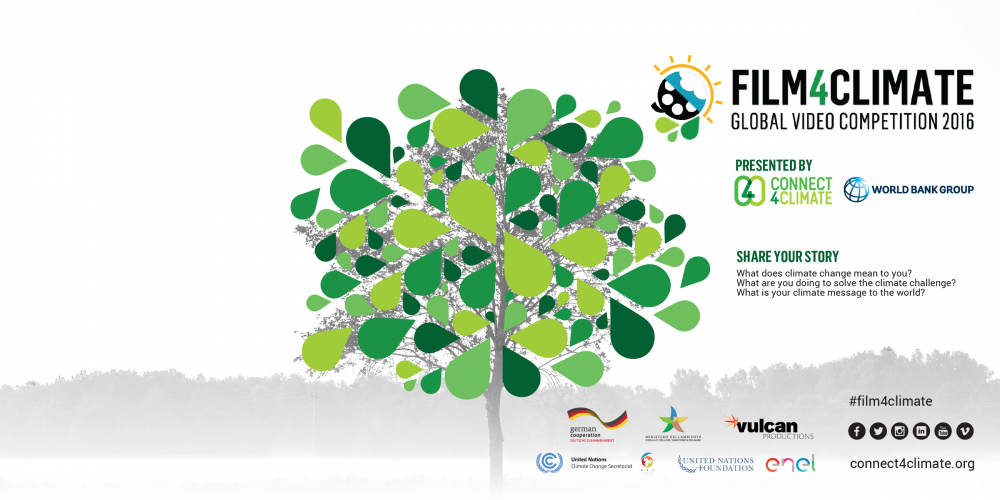 Lucia Grenna, Program Manager for Connect4Climate, will announce the details of the competition at the Film4Climate Conference, to take place from 10am to 3pm on May 16 at the Plage Royale in Cannes. At the conference, partners will exchange ideas about the development of global standards for sustainable film production.  They will also advance discussions regarding international collaboration amongst the program partners to ensure increased exposure and support of climate-focused film and video content. Select jurors and competition partners will be in attendance.

Grenna states, “Climate change requires immediate action at all levels across the world. Our global partnership program aims to empower young people by giving a voice to their vision. We have the science and policy to address climate change, but we need creativity to make it actionable at the individual level. The impact of visual storytelling is essential to communicating the ideas and solutions that are needed to tackle this crisis. Connect4Climate is all about connecting the dots, and the competition aims to amplify opportunities for young creative artists everywhere to bring their personal stories to a global audience.”

Paul Allen’s Vulcan Productions is the exclusive production partner of the competition, and will offer winners an opportunity to have Vulcan distribute their content worldwide. Vulcan Productions will provide overarching support to all areas of Film4Climate Global Video Competition, including promotional and social media. The company will also offer a summer internship in Seattle, Washington, to a college-aged winner.

Carole Tomko, General Manager and Creative Director of Vulcan Productions, states, “Supporting young and aspiring filmmakers is a critical part of our mission, and we believe that storytelling is a powerful tool, not only in driving awareness but in catalyzing behavior change.  C4C has been a tremendous partner in our climate initiatives and we are looking forward to joining forces with them, and to collaborating closely with the filmmakers submitting their creative work to the competition.”

The Film4Climate Global Video Competition invites aspiring young filmmakers from around the world to express their vision for a sustainable future by creating a short film or video about climate action. The competition calls on filmmakers to explore Climate Action, the 13th goal under the UN Sustainable Development Goals, emphasizing what individuals and communities around the world are doing to promote action, offer solutions and inspire positive change to combat climate change and its impacts.  Filmmakers are encouraged to deploy personal narratives that explore fundamental questions such as: What does climate change mean to me? What actions am I taking to mitigate the advance of global warming? What is my Climate Action message to the world?

Films must be five minutes or less to qualify, and the competition is open to filmmakers between 14 to 35 years old. Submissions will be open through September 15. For full competition rules and eligibility requirements, please visit: connect4climate.org

“Climate change is a global challenge that does not respect people or national borders,” said Dan Thomas, Communications Director for the Office of the President of the UN General Assembly. “Here’s an opportunity for a new generation of filmmakers to help inspire us with stories about how people are already working together to build a sustainable, low-carbon future for all.”

Enel is an official partner of the Film4Climate Global Video Competition. The United Nations Sustainable Development Goals are particularly relevant to the Enel Group since the company is actively committed to several SDGs, including access to electricity, education and inclusive and sustainable economic growth. Enel is targeting carbon neutrality by 2050. This film making initiative supports the achievement of SDG 13, calling for urgent action to combat climate change and its impacts.