Transformation is picking up speed in the power sector, but urgent action is required in heating, cooling & transport

Learn|Energy|Policy|Technology
Transformation is picking up speed in the power sector, but urgent action is required in heating, cooling & transport
June 5, 2018
By
REN21 - Renewable Energy Policy Network for the 21st Century

Renewable power accounted for 70% of net additions to global power generating capacity in 2017, the largest increase in renewable power capacity in modern history, according to REN21’s Renewables 2018 Global Status Report (GSR). But the heating, cooling and transport sectors – which together account for about four-fifths of global final energy demand – continue to lag far behind the power sector. The GSR, published today, is the most comprehensive annual overview of the state of renewable energy worldwide. 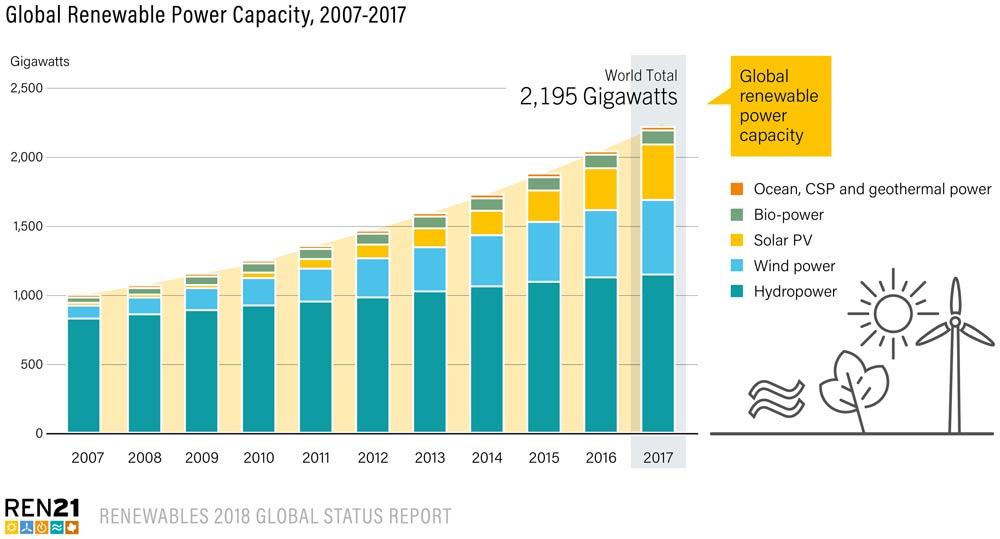 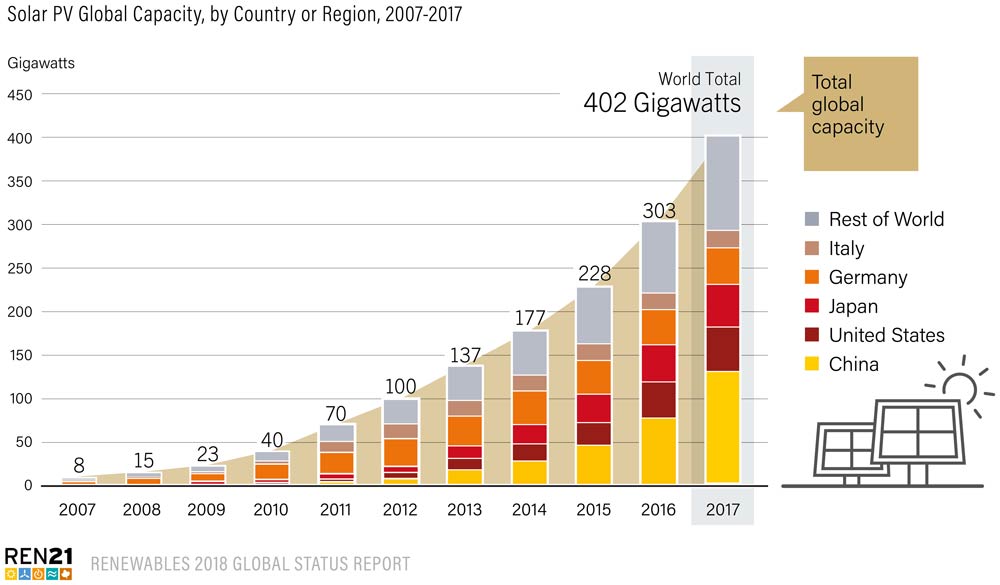 Investment in new renewable power capacity was more than twice that of net, new fossil fuel and nuclear power capacity combined, despite large, ongoing subsidies for fossil fuel generation. More than two-thirds of investments in power generation were in renewables in 2017, thanks to their increasing cost-competitiveness – and the share of renewables in the power sector is expected to only continue to rise. 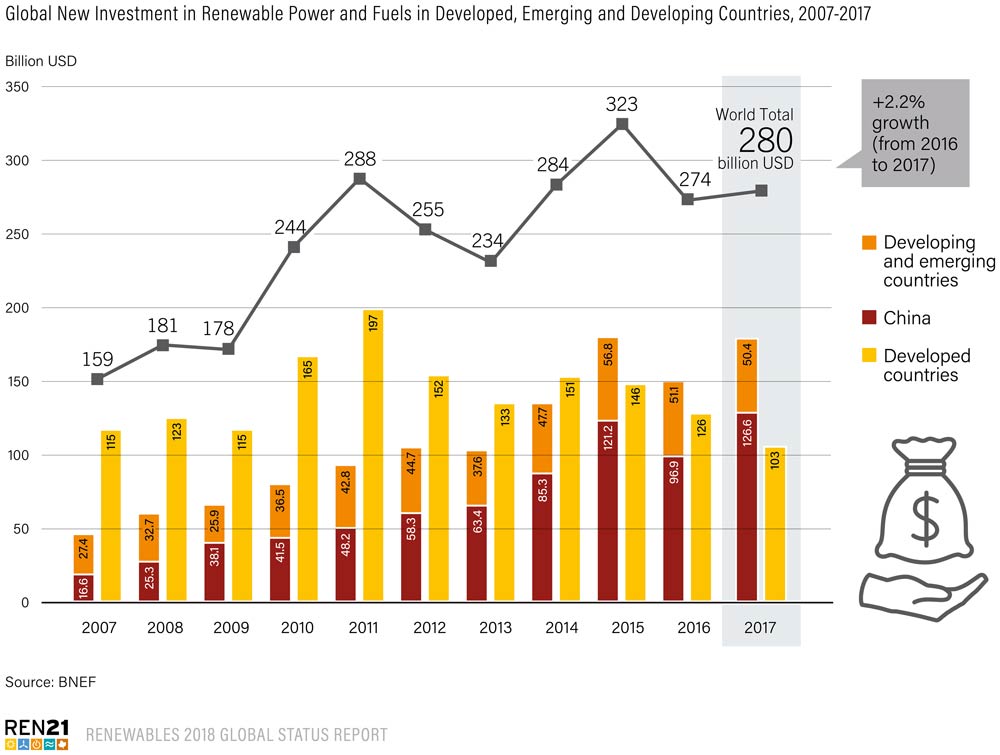 Investment in renewables was regionally concentrated: China, Europe and the United States accounted for nearly 75% of global investment in renewables in 2017. However, when measured per unit of gross domestic product (GDP), the Marshall Islands, Rwanda, the Solomon Islands, Guinea-Bissau, and many other developing countries are investing as much as or more in renewables than developed and emerging economies.

In the power sector, the transition to renewables is under way but is progressing more slowly than is possible or desirable. A commitment made under the 2015 Paris climate agreement to limit global temperature rise to “well below” 2 degrees Celsius above pre-industrial levels makes the nature of the challenge much clearer.

If the world is to achieve the target set in the Paris agreement, then heating, cooling and transport will need to follow the same path as the power sector – and fast. These sectors have seen:

Small changes are under way. In India, for example, installations of solar thermal collectors rose approximately 25% in 2017 as compared to 2016. China aims to have 2% of the cooling loads of its buildings come from solar thermal energy by 2020.

In transport, increasing electrification is offering possibilities for renewable energy uptake despite the dominance of fossil fuels: More than 30 million two- and three-wheeled electric vehicles are being added to the world’s roads every year, and 1.2 million passenger electric cars were sold in 2017, up about 58% from 2016. Electricity provides 1.3% of transport energy needs, of which about one-quarter is renewable, and biofuels provide 2.9%. Overall, however, 92% of transport energy demand continues to be met by oil, and only 42 countries have national targets for the use of renewable energy in transport.

For these sectors to change, the right policy frameworks need to be put in place, driving innovation and the development of new renewable energy technologies in the sectors that are lagging.

“Equating ‘electricity’ with ‘energy’ is leading to complacency. We may be racing down the pathway towards a 100% renewable electricity future, but when it comes to heating, cooling and transport, we are coasting along as if we had all the time in the world. Sadly, we don’t.” 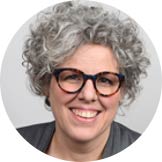 “To make the energy transition happen there needs to be political leadership by governments – for example by ending subsidies for fossil fuels and nuclear, investing in the necessary infrastructure, and establishing hard targets and policy for heating, cooling and transport. Without this leadership, it will be difficult for the world to meet climate or sustainable development commitments.” 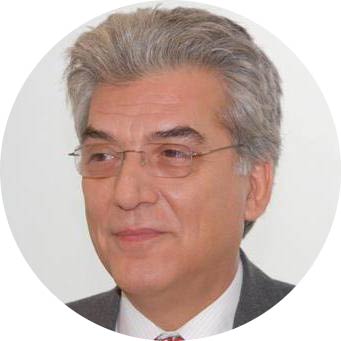 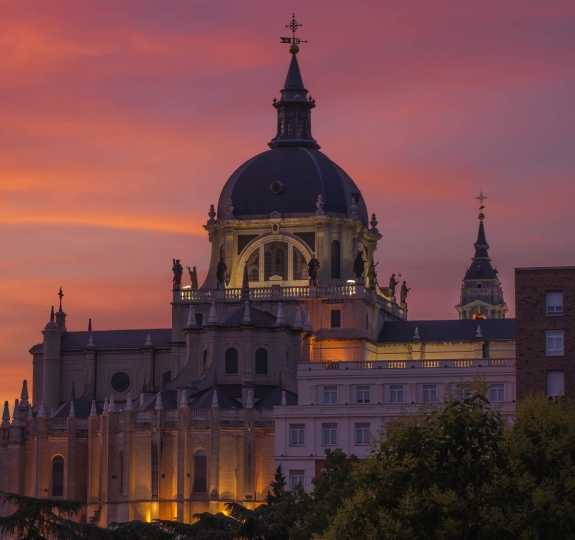 COP25: Five Tips & Tricks on How to Get Involved