Towards a Climate-Smart World: 12 Ways for a Resilient Future

Learn|Finance|Policy
Towards a Climate-Smart World: 12 Ways for a Resilient Future
December 1, 2017
By
The World Bank Group

The ceiling of Rai Tabusoro’s home was ripped away by catastrophic winds. The 43-year-old was able to save the life of his elderly mother by placing her in a concrete bathroom, as well as a pregnant woman who he carried to shelter.
In the same Fijian village, Asmita Kamal, a 24-year-old teacher, found shelter under a table with her grandmother while her family hid under a bed as Cyclone Winston blasted through their village. Despite their best efforts to secure their house, strong winds swept away just about everything.
In early 2016, the Fiji province of Ra was hit by Cyclone Winston, the biggest storm ever recorded in the Southern Hemisphere, impacting 62% of the Fiji population and caused F$2 Billion in damage (20% of GDP). It killed 44 people, injured hundreds and left 131,000 people homeless. The Category 5 storm first made landfall in Ra, leaving its communities completely devastated.
Cyclone Winston was an example of new enemies facing communities. Enemies that are linked to climate change.
And 2017 was no better. It’s been a year of catastrophic climate events. Record-breaking hurricanes claimed lives and destroyed infrastructure across several island states in the Caribbean and in towns and major cities in the southern United States. Whenever extreme weather events like hurricanes and cyclones strike, they leave more than just a trail of devastation—they also leave communities further in the grip of poverty because poor people are more likely to live in fragile housing in disaster-prone areas, and work in sectors dangerously susceptible to extreme weather events, like farming and agriculture. In the end, the impact of a storm, flood, drought or earthquake is more than twice as significant for poor people than anyone else.

Taking action to reduce the carbon dioxide emissions that are causing climate change while also building resilience to more frequent and more extreme weather events, is now critical to development the world over. 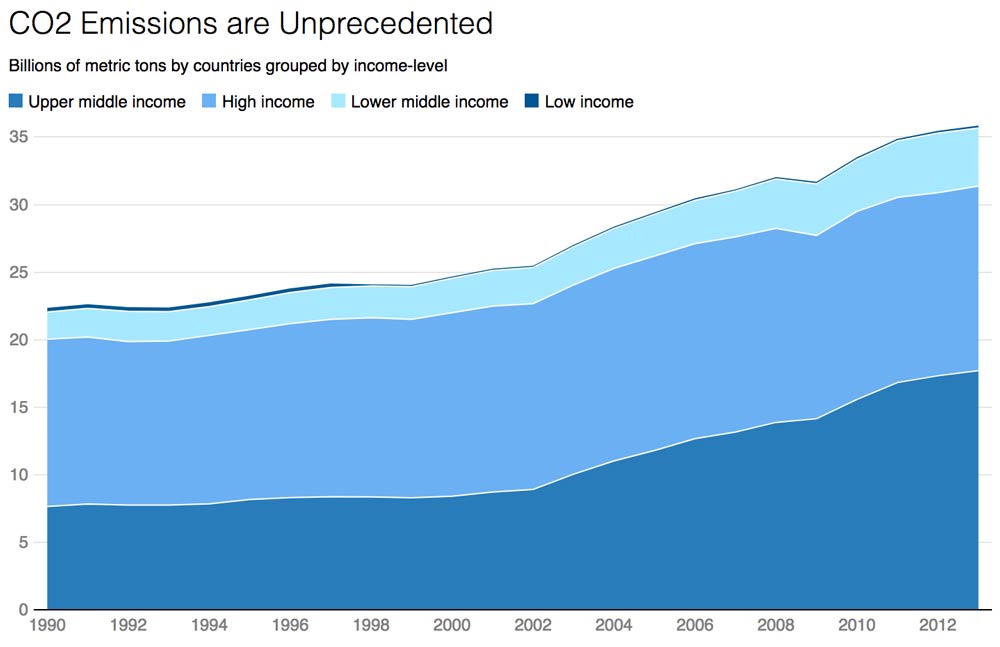 Two years ago, more than 180 countries came together to sign the landmark climate Paris Agreement – to keep global temperature rise well below 2 degrees Celsius. But global temperatures have already increased by over 1 degree Celsius since the pre-industrial era. And concentrations of carbon dioxide in the atmosphere are now at their highest for 800,000 years. After three years in which global emissions had leveled off, they recently started to rise again.
What seems like a small change in temperature is already preventing people from escaping poverty, and without rapid, inclusive and climate-smart development, there could be more than 100 million additional people in poverty by 2030.  For example, by 2030, crop yield losses could mean that food prices would be 12 percent higher on average in Sub-Saharan Africa. The strain on poor households, who spend as much as 60 percent of their income on food, will be dramatic. The resulting malnutrition could lead to an increase in severe stunting in Africa of 23 percent. 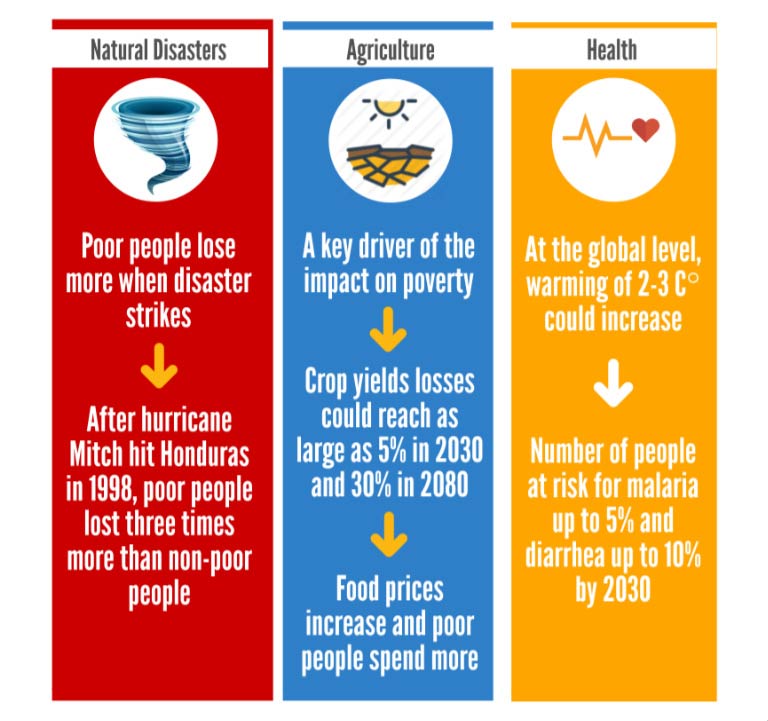 Infographic: Managing the Impacts of Climate Change on Poverty. View the full infographic.

Meeting the Paris climate commitments will require investments at an unprecedented speed and scale. Over the next 15 years, the world will require about $90 trillion in new infrastructure – most of it in developing and middle-income countries.
The World Bank Group (WBG) is more committed than ever to helping countries meet the climate challenge.
Over the last two years the World Bank Group has been on the frontline, committing billions to help countries meet their climate goals, delivering assistance across sectors, and pushing forward on global issues to reflect the growing international consensus that climate change must be tackled rapidly, systematically, and at scale. The Bank Group is committed to increasing the climate-related share of its portfolio to 28 percent by 2020, in response to client demand. At current levels of co-financing, that would mean a potential $29 billion a year for climate projects by 2020. 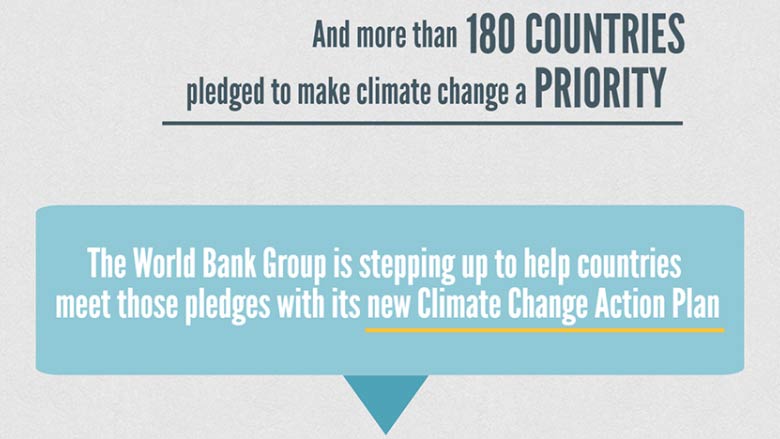 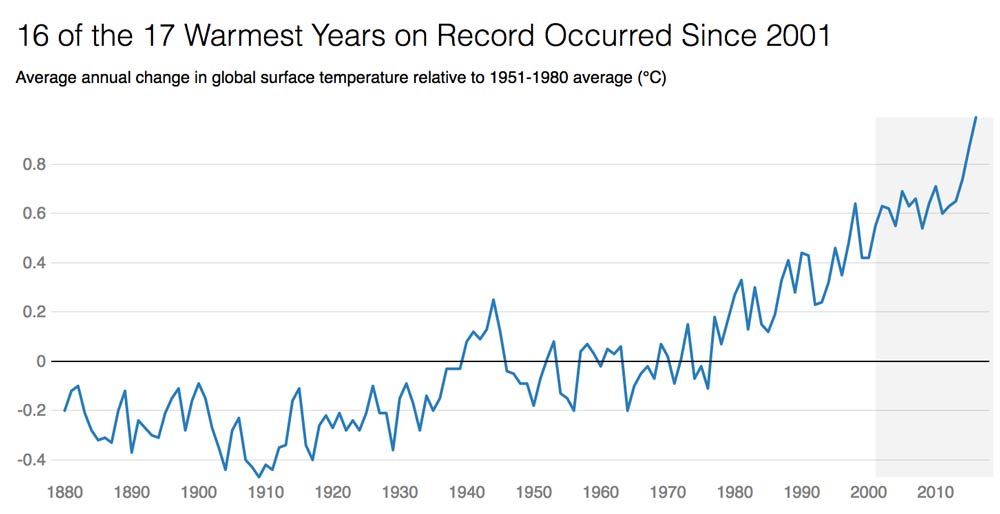 On December 12, 2017, two years after the signing of the historic Paris Agreement, the government of France is hosting the One Planet Summit, which will bring together hundreds of heads of state, private sector CEOs, mayors, philanthropists and civil society leaders in Paris to reaffirm the world’s commitment to the fight against climate change. The Summit will focus on how to mobilize the financing needed to meet the Paris Agreement goals and brings together key actors who can help advance innovation, create jobs, and invest in the countries that need it the most.
Since the Paris Agreement was adopted in 2015, countries have been working to grow their economies while reducing their emissions and build resilience to the potential impacts of climate change.
At the Summit, the World Bank Group and its partners will be showcasing some of the climate-smart projects in a range of countries. This includes bringing a clean and efficient rapid transit system to Dakar in Senegal, overcoming barriers to investment for geothermal energy in Indonesia, expanding the world’s largest solar rooftop market in India, bolstering climate-smart agriculture in Ghana and Ethiopia, and restoring resiliency to large areas of West Africa’s coastline.
Related article:
12 Ways The World Bank Group is Supporting a Climate-Smart Transformation
Ahead of the One Planet Summit on December 12, here are 12 ways the World Bank Group is helping countries transform to a climate-smart world:
1. Resilient Coasts: A regional investment platform aims to crowd-in finance to manage coastal erosion and flooding in West Africa.
2. Climate Insurance: A risk insurance program can help bolster relief efforts for vulnerable countries and speed up recovery in the Philippines.
3. Climate-Smart Agriculture: Cocoa and chocolate producing countries and companies take action to end deforestation.
4. Resilient Cities: A City Resilience Program will help connect hundreds of cities access the finance they need to become climate-smart.
5. Mobility: A bus rapid transit system will enhance urban mobility, reduce pollution and promote economic growth in Senegal.
6. Forests/Landscapes: A unique collaboration helps the coffee industry in Ethiopia become more resilient to climate change and restore vital forests.
7. Hydromet: New and modernized hydromet services will strengthen early warning and response systems across Africa.
8. Green Bonds: The largest new green bond fund dedicated to emerging markets is expanding financing for climate-smart investments.
9. Carbon Pricing: A coalition of global leaders is driving climate action with effective carbon policies worldwide.
10. Solar: A 750 ultra-mega solar plant will help power Delhi’s metro rail system in India.
11. Geothermal: A new facility will lead to the development of large-scale geothermal energy in Indonesia.
12. Energy Efficiency: An energy services company drives down prices of LED bulbs and unlocks energy efficiency potential in India. 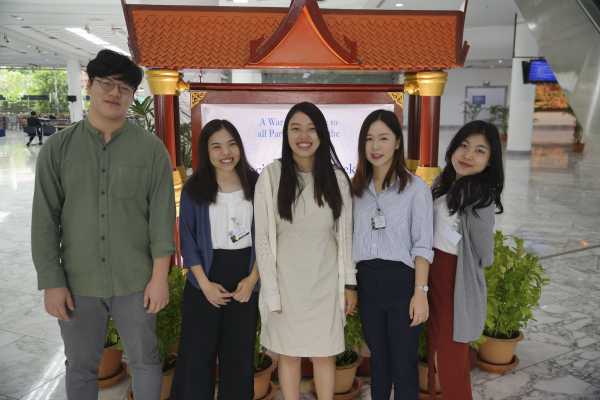