The Film4Climate Global Video Competition opens today as the centerpiece of the Connect4Climate initiative to promote sustainability in the creative industries through active engagement with young people in finding solutions to climate change. Send in your videos either through our website or at film4climate.net. 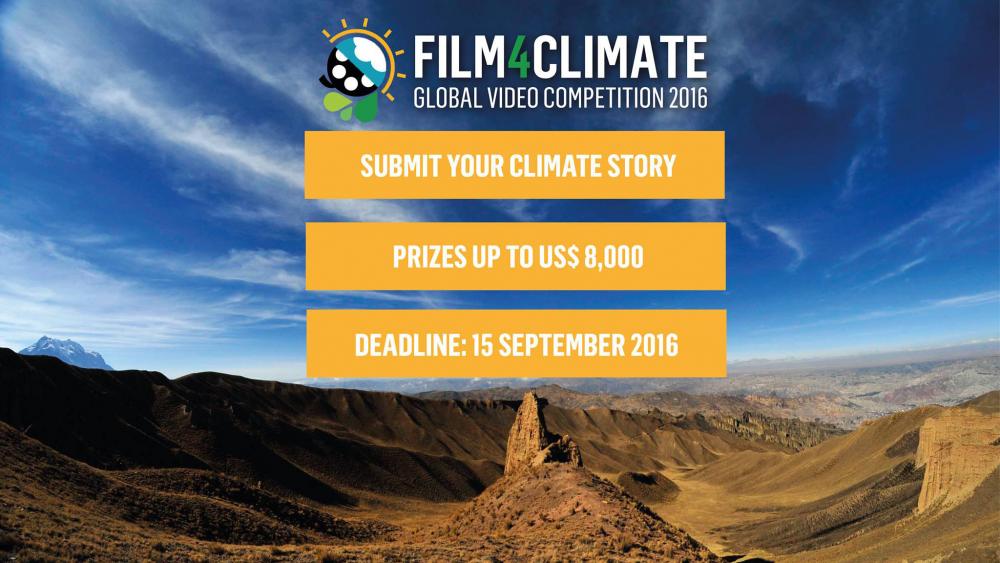 Announced at the Cannes Film Festival by the World Bank Group’s Connect4Climate global partnership program, the competition will be open for submissions through September 15, with the winners to be announced at a high-profile awards ceremony at the United Nations COP22 Climate Summit in Marrakesh, Morocco in November.

The winning entries will receive cash prizes of $8,000, $5,000, and $2,000 for first, second and third place in each of two categories: an under one-minute Public Service Advertisement (PSA) or a Short Film up to five minutes.

The competition offers filmmakers a chance to have their work reviewed by a jury chaired by Bernardo Bertolucci, and including other preeminent directors, producers, writers and political leaders.

At the competition’s announcement in Cannes, producer and jury member Lawrence Bender said, “In every country, every city, people have different stories on climate change...there are many stories that can be told. If this worldwide film competition creates a critical mass of ideas and energy, it could help tip the balance in terms of focusing people’s attention.” 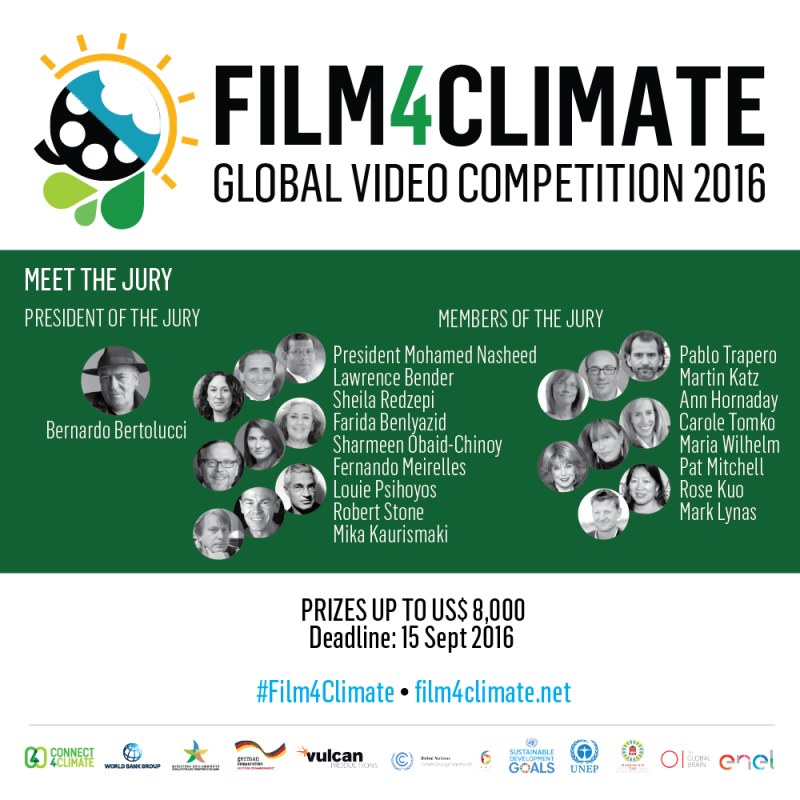 As the next five years will be critical to advancing and scaling up climate action around the world as part of the Sustainable Development Goals (SDGs), the COP22 climate summit aims to encourage countries to implement ambitious climate actions, with youth playing a vital role in the agenda.

“It is not our role to inspire youth, it is they who inspire us every single day. Our mission is to provide them with a platform, and COP22 will be the opportunity to show the world the creativity of young filmmakers and how they are taking action on climate change,” stated Dr. Hakima El Haite, Delegate Minister in Charge of Environment, Morocco, Special Envoy for Mobilization of COP22, and High-Level Champion of the United Nations Framework Convention on Climate Change (UNFCCC).

Nick Nuttall, Spokesperson/Head of Communications, UNFCCC, adds, “In order to unleash the full potential of the Paris Climate Change Agreement towards a better, more climate-safe world, all sectors of society and all walks of life need to be on board, including the creative industries. We are therefore delighted to be working with Connect4Climate to raise awareness on how the film industry can fast forward its contribution, and to showcase these achievements in Morocco in November at the next UN climate change conference.”

Sheila Redzepi, Vice President of External and Corporate Relations, World Bank Group, says: “Climate change is a real and global threat affecting people’s wellbeing, livelihoods, the environment and economies. Communication is a powerful tool in furthering understanding of its impact and inspiring action to tackle it. That’s why I welcome this initiative and the support it has received from partners who, in their own fields, are leading the way in finding solutions.”

In addition to the main cash prizes a number of special prizes will be awarded to outstanding entries. These include a People’s Choice award, a MENA-Award for the best entry from the Middle East and North Africa region, and a “Price on Carbon Pollution” award. Other prizes, including worldwide distribution by Vulcan Productions, will be awarded as determined by presenting partners. Vulcan previously partnered with the World Bank Group’s Connect4Climate program to produce the spectacular large-scale architectural projection and public art display of images of climate change on St. Peter’s Basilica in December 2015, as a gift to Pope Francis, which was seen by an audience of several billion people.

Carole Tomko, General Manager and Creative Director of Vulcan Productions, said: “We know the immense power of imagery and storytelling to change the way people view an issue, to raise awareness and inspire progress. That is what we are looking for in the entries to this competition: a brief, brilliant film that energizes and communicates a new sense of possibility.” 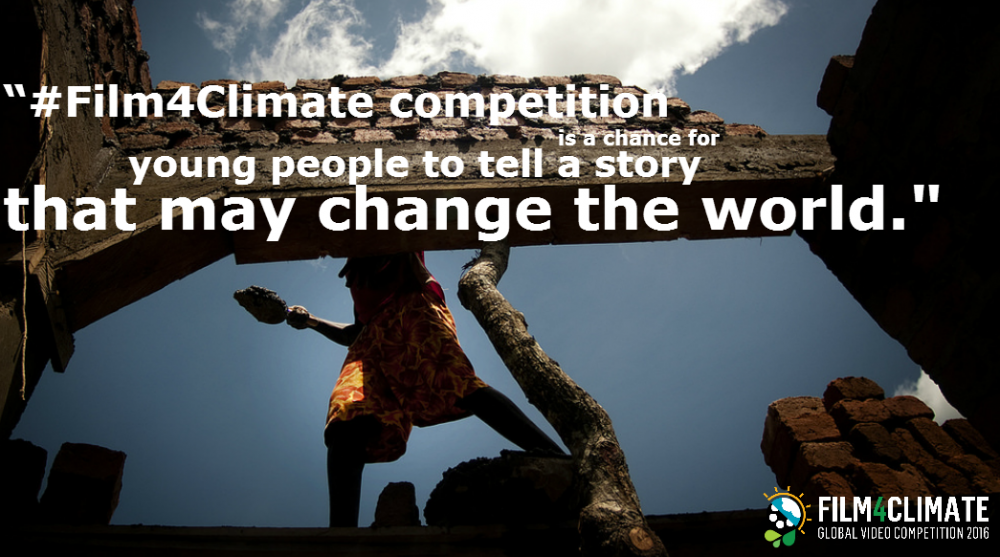 “This competition is a chance for young people to tell a story that may change the world,” said Lucia Grenna, Program Manager of Connect4Climate, the global partnership program behind the competition. “The science of climate change is beyond debate. Politicians are moving in the direction of a solution. What we need now is the creative push that the passion and imagination of young people can provide. We need their images and words to tell a story that inspires individual responsibility and collective action on a global scale.”

The competition is the outcome of a partnership between the World Bank Group’s Connect4Climate program, the United Nations, Vulcan Productions, and the Italian energy company Enel, which has endorsed the UN’s Sustainable Development Goals and targeted carbon neutrality for its operations by 2050. Other presenting partners include the UNFCCC, UN Sustainable Development, UNEP, The Global Brain, and the Government of the Kingdom of Morocco. In addition, more than 50 collaborating partners are supporting the competition.

Connect4Climate receives support from the Italian and German governments, as well as from the private and public sectors, and academia. Join the climate knowledge partnership.

Please share the #Film4Climate competition with your family and friends. We hope to present stories from all corners of the world at COP22.

Download the Social Media Pack. Use the #Film4Climate hashtag.

The Film4Climate Global Video Competition invites filmmakers from around the world to express their vision for a sustainable future by creating a short film or video about climate action.

The competition calls on filmmakers to explore Climate Action, the 13th goal under the UN Sustainable Development Goals, emphasizing what individuals and communities around the world are doing to promote action, offer solutions and inspire positive change to combat climate change and its impacts. Filmmakers are encouraged to deploy personal narratives that explore fundamental questions such as: What does climate change mean to me? What actions am I taking to mitigate the advance of global warming? What is my Climate Action message to the world?

Videos must be submitted as Public Service Announcements that are less than one minute, or as a Short Film, between one and five minutes. 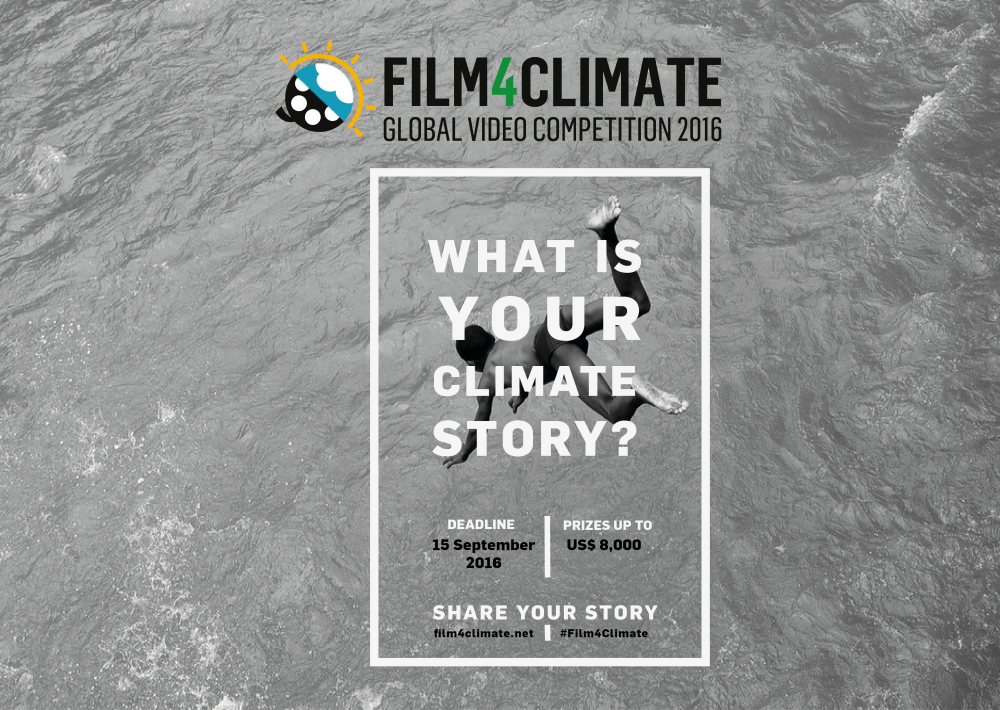 The competition is open to filmmakers between 14 and 35 years old. Submissions will be open through September 15, 2016. For full competition rules and eligibility requirements, please visit: film4climate.net or on our website here. 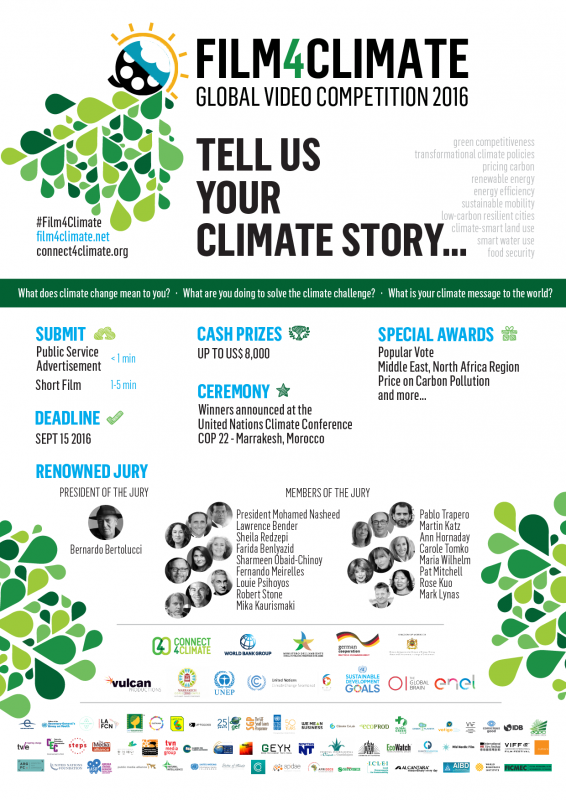 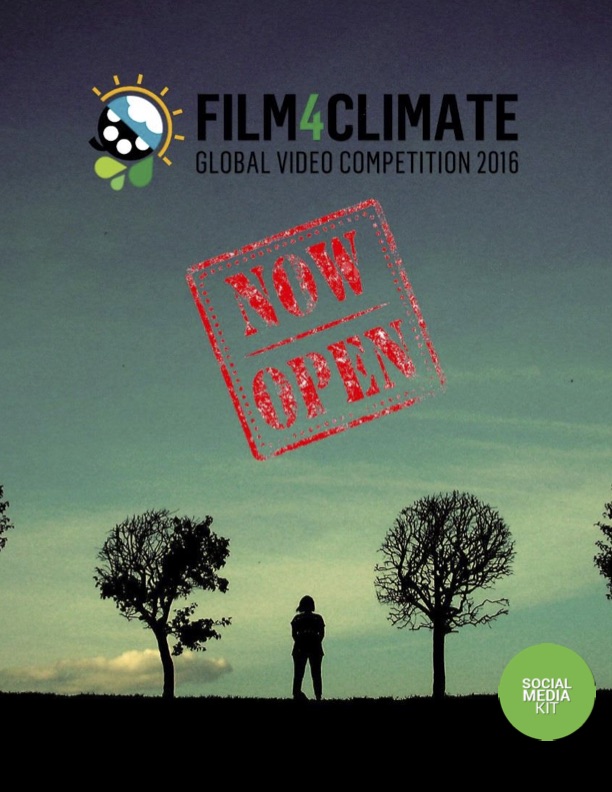 You can read and download the Press Release in: English, French, Spanish, Arabic, Italian, Portuguese and Korean. 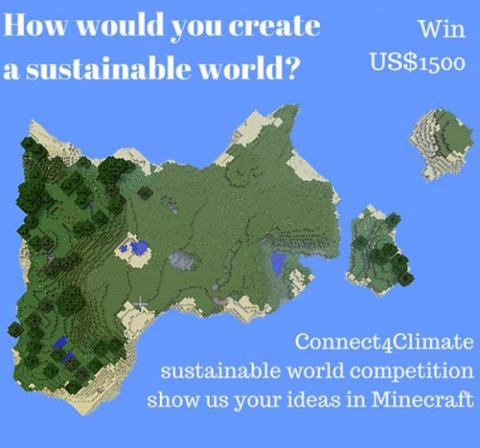 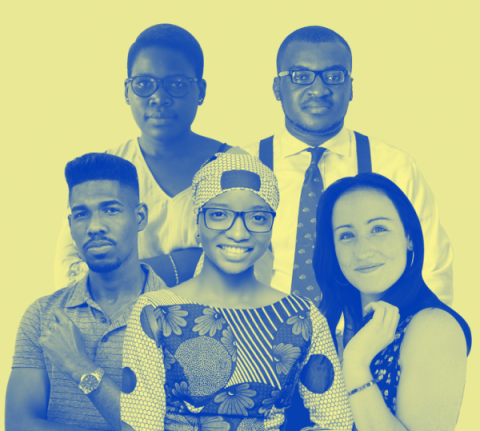 Youth4Climate
The Youth Who Took Innovate4Climate 2021 By Storm