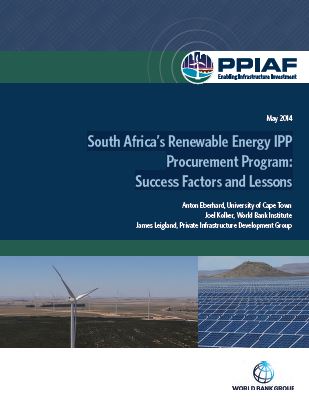 South Africa occupies a central position in the global debate regarding the most effective policy instruments to accelerate and sustain private investment in renewable energy. In 2009, the government began exploring feed-in tariffs (FITs) for renewable energy, but these were later rejected in favor of competitive tenders. The resulting program, now known as the Renewable Energy Independent Power Producer Procurement Program (REIPPPP), has successfully channeled substantial private sector expertise and investment into grid-connected renewable energy in South Africa at competitive prices. To date, a total of 64 projects have been awarded to the private sector, and the first projects are already on line. Private sector investment totaling US$14 billion has been committed, and these projects will generate 3922 megawatt (MW) of renewable power. Prices have dropped over the three bidding phases with average solar photovoltaic (PV) tariffs decreasing by 68 percent and wind dropping by 42 percent, in nominal terms. Most impressively, these achievements all occurred over a two-and-a-half year period. Finally, there have been notable improvements in the economic development commitments, primarily benefiting rural communities. One investor characterized REIPPPP as 'the most successful public-private partnership in Africa in the last 20 years.' Important lessons can be learned for both South Africa and other emerging markets contemplating investments in renewables and other critical infrastructure investments.