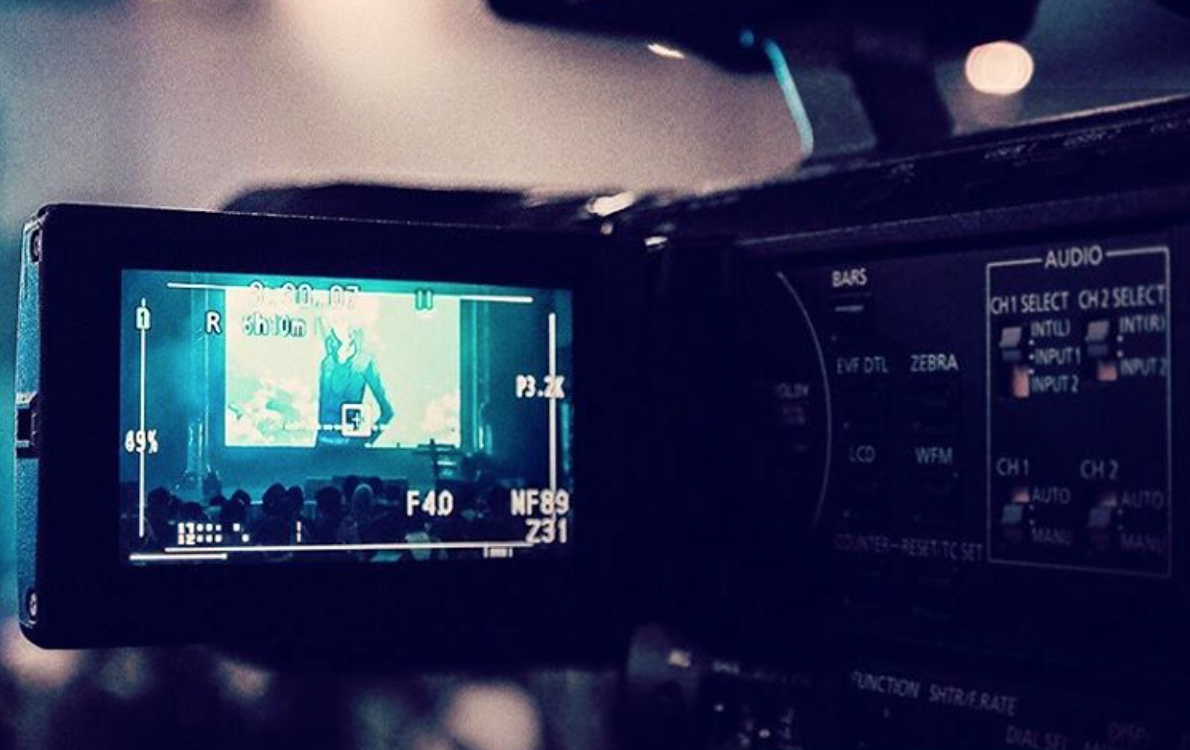 Vancouver rides at the helm of sustainability! One of the first cities to respond to climate change with its “Clouds of Change” report in 1990, it is now committed to becoming the ‘greenest city on earth’ by 2020.

Already it claims the smallest per capita carbon footprint for North American cities.  Shared energy, green transportation and zero waste projects abound.  And the great thing is that it all seems very practical in nature. There’s a remarkable confidence and the ability to get it done.

Incorporated into this game plan is the Film and Entertainment industry in British Columbia. How to make film production as sustainable as possible is a strong concern of production companies and the local government alike as well as the Film and Economic Commissions. This also aligns with the work at Connect4Climate and Film4Climate. 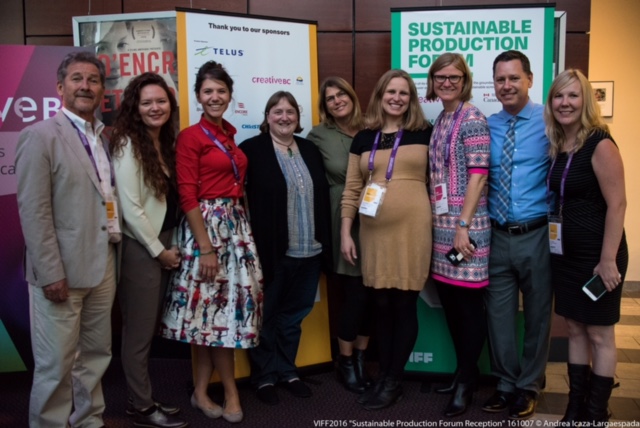 The Vancouver International Film Festival (VIFF) is renowned across the world for encouraging and giving a voice to important new trends that can influence thinking for the future. Connect4Climate was pleased to partner this year to support the Sustainable Production Forum – a day of discussion and illustration offered by the Festival to explore what is happening in the film industry, both locally and internationally.

The keynote was given by Chris Carter, creator of The X-Files, who shot the TV series and the features in British Columbia taking care to be as sustainable as possible.  “87% of our sets were recycled” was his rallying cry. Materials such as expanded polystyrene foam, used in set building can be recycled.  On The X-Files, 40.5 tons of this material was diverted from landfill. 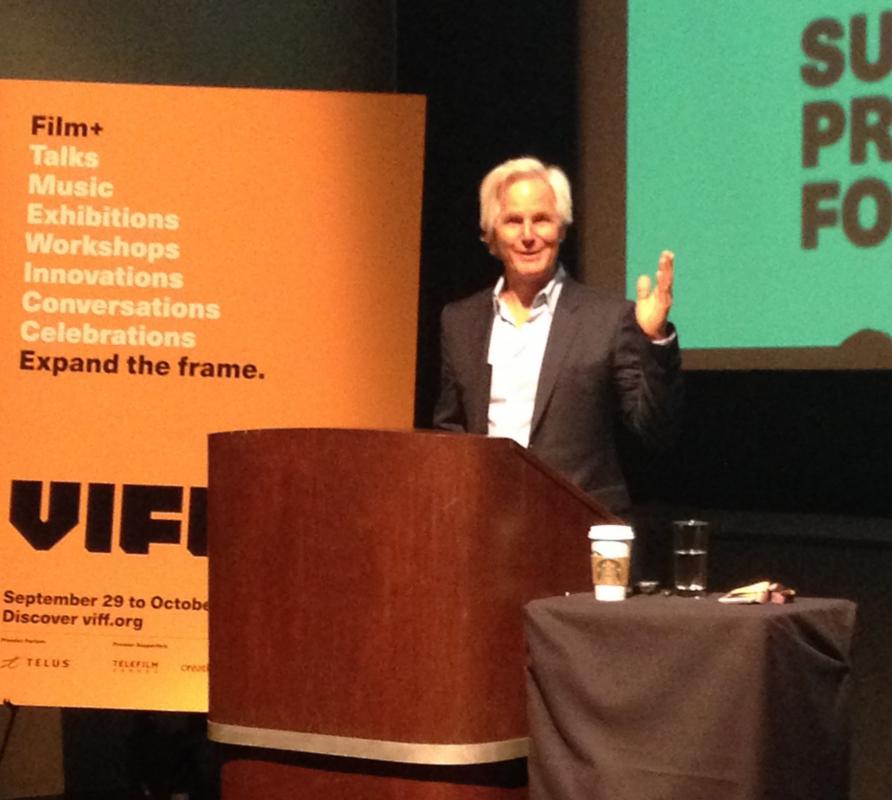 The session, Sustainability at the Studios was led by Prem Gill, the CEO of Creative BC and featured Shannon Bart of NBCUniversal, Lisa Day from Fox, Mike Slavich of Warner Bros. Entertainment and Heidi Kindberg Goss from Sony Pictures. Discussion included how sustainable production initiatives could be applied on an international scale.  Aaron Matthews of The British Academy of Film and Television Arts (BAFTA) and Francis Dobbs of Connect4Climate (C4C), along with Producer/Director Carl Fechner (“Power to Change”) explored what was being done already through BAFTA/BBC to expand initiatives such as the carbon calculator Albert, and by Film4Climate, C4C’s hub to encourage a universal code for sustainable production and more debate over inclusion of the content issues. 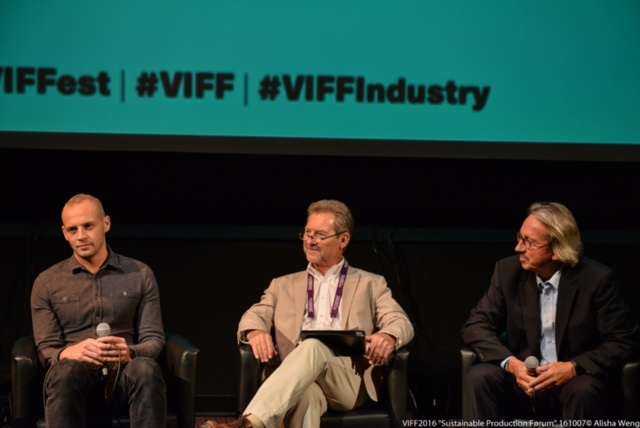 [From left to right] Aaron Matthews of The British Academy of Film and Television Arts (BAFTA), Francis Dobbs of Connect4Climate (C4C), and the Producer/Director Carl Fechner  Photo credits: Alisha Weng

The afternoon sessions were very much about the nitty-gritty practicalities – and getting it done, especially on a day-to-day basis in Vancouver. It was exhilarating to hear about the efforts producers are making to incorporate sustainability concerns into productions, including waste disposal and recycling, transport efficiency and food supplies.

Zena Harris, Creative Director of the Sustainable Production Forum noted that  “If producers are committed, they can significantly reduce the amount of waste to landfill and carbon emitted.  We are demonstrating this in British Columbia and we learned from other jurisdictions taking significant steps to reduce their impacts as well.”

Practical sustainable production activities when taken seriously can make all the difference in a production’s footprint. It is indeed this enthusiasm that we must encapsulate, package and present to the rest of the world.

The  overarching solution to international adoption of sustainability in production is to get everyone not just talking about it, but doing it -  and Vancouver is certainly doing just that  - showing that it is both possible and cost effective - and, indeed, exciting!  Film4Climate will be doing its utmost to encourage similar approaches elsewhere.